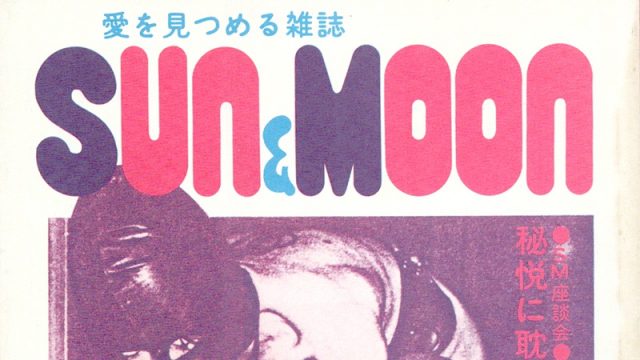 While many readers may be familiar with the SM better known SM magazines in Japan, such as Kitan Club and Uramado, one smaller magazine, Sun & Moon, provides some fascinating insights into the emergent Japanese culture of kinbaku in the late 1970s.  Several magazines took on obscure titles (Suspense Magazine being a notable example) that included the letter S and M, singling the magazine’s risque content.

I was lucky to find copies of the first six issues during my last trip to Tokyo.

The early editions of Sun & Moon featured the work of Roppongi Kaoru (issues 1 & 2) and Shikou Shima (beginning with issue 4) and were edited by Kaiichi Seda, a former contributor at Kitan Club and SM Select who started Sun & Moon after Kitan Club ceased publication in 1975.

The first incarnation of the magazine ran from March to December of 1977 and was limited to 6 issues.  In 1978, the magazine was purchased by Tsukasa Shobo and the name was changed from Sun & Moon to Sun and Moon, at which time Urado Hiroshi took over as editor.