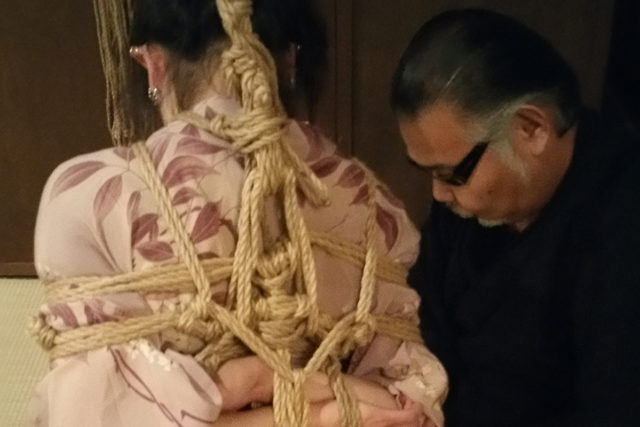 Miura Takumi passed away on November 1st, 2021 after a long battle with pancreatic cancer. He was best known as one of the founders, along with Akechi Denki, of Bakuyukai, which would become known as Japan’s first rope dojo. Founded in 1996 with Akechi Denki as President and Miura Takumi as head instructor, they sought to create a new school of rope that would focus on teaching in a salon format in contrast to the more standard idea of classes which taught single ties. After Akechi’s passing in 2005, Miura sensei would become President of Bakuyukai and would develop his own distinctive style of tying and system of passing that style on to his students.

I was very lucky to have been able to meet and study with Miura sensei, starting in 2017. What I will remember most about him was his warmth and his spirit. For me, Bakuyukai was more than a classroom and more than a rope dojo, it was, as the name suggests, a gathering place for those who loved to tie. (Bakuyukai is a collection of kanji: Baku (縛) which means to tie, Yu (友) which means friend, and Kai (会) which means meeting or association.)

Working on ties under the watchful eye of Miura sensei was always a little intimidating. He tied with a methodological precision that was distinctive and which always resulted in dramatic and beautiful ties. Watching him work was akin to watching an artist paint, each rope, each placement, each wrap was done with intention and design. The resulting work was always something more than the sum of its parts.

Above all else, though, Miura sensei loved the history and tradition of rope. He loved to discuss tradition and to show how techniques dating back to old schools of hojojutsu could be used in contemporary bondage. He began his study of older ties by collecting and reading what little information was available and working to reconstruct those techniques.

Miura sensei’s style of teaching mirrored martial arts instruction in many ways. Like martial arts kata, each level of tying was structured around specific ties and they would need to be performed with proper technique and tension, often under timed conditions. The Bakuyukai system was designed to promote technical mastery of basics and fundamentals that would allow students to progression through a series of ties, ensuring they were done properly and, above all, safely.

One of Miura sensei’s greatest concerns was that shibari be done with the safety of the model in mind and his reluctance to teach outside of Japan was focused on the fear that he would not be able to adequately communicate some of the finer aspects of his shibari in a way that would ensure that ties were done safely.

In an interview with Osada Steve in 2008, Miura sensei was asked how he would like to be remembered. His answer was this:

If I am remembered for anything, I hope it would be as someone who tried to protect and preserve our unique tradition of rope bondage. I think it’s fine if people try new things with shibari, as long as they do it safely. But for myself, I want to follow the path of tradition.

During my first visit, he demonstrated and taught me one of the ties he had reconstructed from hojojutsu texts, pointing out both the unique elements to the tie, as it might have been used to capture and tie prisoners, as well as some of the aspects which would find their way into more contemporary ties that we would use today. For Miura sensei, the link between the past the present was an essential part of understanding shibari.

For anyone who would like to know more, the Bakuyukai approach to rope was documented in a 4 video series (two featuring the ties of Akechi Denki and two featuring Miura Takumi).