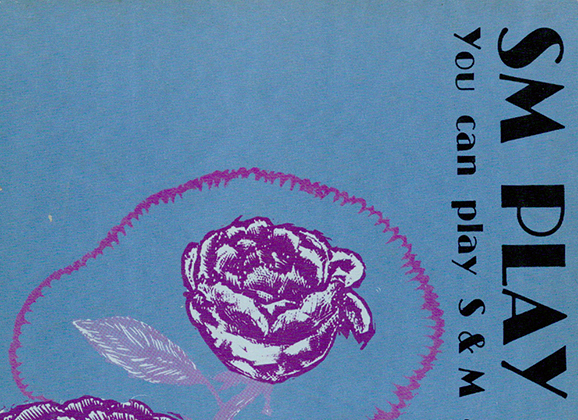 SM Play:  You can play S&M (published 1972), is the first book to appear in Japan that can be described as a a “how to” or “tutorial.”  Written by Urato Hirosho, bakushi for many of the 1970s “Roman Porno” films from Nikkatsu studios, this book follows the tradition of most of the major Japanese SM periodicals, which featured small sections that would illustrate techniques for ties.  Over the course of his career, his kinbaku would be featured in more than 40 films, including the original Flower and Snake and the box office hit Wife to Be Sacrified.  Urato was not only a bakushi for the movies, but as one of the early collaborators with Minomura Kou and Oniroku Dan, Urato had experience in many different facets of SM, including publications of several photo books as well as editing the SM magazine Sun & Moon.

Urato’s style exemplifies some of the most interesting Showa style ropework emerging among his bakushi in the early 1970s, a time when kinbaku was starting to take shape and developing in both technique and in public awareness in Japan.

As Master K notes, Urato’s style is unique among his contemporaries (though clearly influenced by his mentor Minomura Kou), ” it’s a type of kinbaku that’s full of subtle surprises and often untraditional in approach.”  Among one of the main differences, is Urato’s preference for using cotton rope, rather than the more traditional asanawa, a result, in part, from his need to tie models who were more sensitive than a typical rope bottom may be in his film work.

Some examples of the tutorial pages from SM Play

Some examples of the gallery images from SM Play