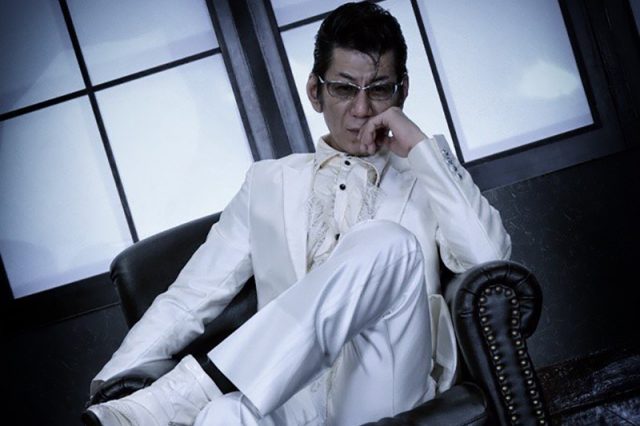 *Please note : I am introducing the commonly used Japanese words “shibari – te” : person who ties) and “uke-te” : a person who receives) instead of the terms rigger or bottom. I would like to create distance from the word rigger as the actual word itself does not imply anything related to kinbaku or SM. The japanese terms are very specific in role and also leave room for those who are considered kinbaku or nawashi and for those who are not at that level or just starting out. Shibari means to tie. Uke means to receive. Te means the person that does.

An Accident could happen to anyone

Even if you drive with extreme care, you cannot prevent all accidents. Just as there is no winter season when we don’t hear news of bus accidents caused by slipping off from icy roads, in kinbaku, you can never assume that you’re safe just because the person who ties you is an “experienced” or “professional” kinbaku-shi. I think people who say “I have never caused an kinbaku accident in the 10 years I’ve been doing kinbaku” have only been very lucky. When you tie someone with rope, it is as dangerous as if playing in a Chanbara game* with a real knife. *Chanbara is Japanese sword fighting

Some people are so bold as to comment on how or why a kinbaku accident happened just by looking at one picture. However, if you asked a decent doctor, “Doctor, this girl suffered nerve compression in her arm when this picture was taken. Could you tell me what was wrong with the way she was tied?” I am sure the doctor will answer simply: “Well…. probably because someone is trying to suspend her with rope.”

The truth is accidents can happen to anyone.

If there was a driving school which claimed “You will never cause an accident if you learn driving here,” I would never attend. Accidents can occur anytime but to reduce this possibility, I have put together some suggestions.

Be interested in the structure of the human body

One thing you can do is to learn the location of muscles, as well as where the nerves and vessels are running in a human body. You can easily get an illustrated map of where nerves run on the Internet. However, at the same time, you should always remember that those illustrations are only one example of a particular person. The route of nerves and vessels, not to mention the muscles in the human body, are different from person to person. Therefore, we should be aware of how dangerous it is to assume that we know the structure of human body just because we have looked at such illustrations; we are still merely the general public without any expert knowledge of anatomy. 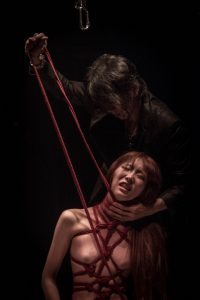 Don’t believe everything someone teaches

“Because I was taught by mr./ms. so and so kinbakushi, what I do is absolutely correct“ is a delusion.

First of all, it’s not guaranteed you have understood 100% of what he/she taught. No matter what workshop or lesson, just by reaching such and such level doesn’t give you a “get off free” pass for avoiding accidents.

Please keep in mind that those who know more about shibari are even more conscious of the possibility of causing accidents.

Don’t ignore any feeling of uneasiness

In Japanese, there is the phrase “ma ga sasu” which roughly translated means that the “devil arises” or rather that the devil interferes within us and we succumb to temptation. All humans have a moment of “succumbing to temptation.”

“This rope might be a bit out of place, but it shouldn’t cause much problem”

“Something doesn’t feel right, but I won’t worry about it.”

The feeling of “this degree should be OK” can lead to a big accident.

This applies equally to the teacher who gave you a “pass” in a shibari test. Even a very strict and rigid teacher may have times when they think “this shouldn’t be a problem. I can let this rope stay as it is.” Or “this student has been coming to me for so long so…” the teacher ends up ignoring whatever problems the student has. In both cases, the teacher lets down their guard and standards succumbing to their own emotions.
Please understand each one of us has a moment of letting down our guards and giving in to the temptation of ignoring our inner voice even if we were extremely cautious.

Next without arrogance, pay attention to your partner’s reactions.

It is difficult and maybe even impossible to completely be able to ascertain whether your partner is feeling something sexually, feeling discomfort or feeling pain. (I am not saying that giving pain is bad but rather that an acceptable amount of pain and unacceptable amount is difficult to differentiate). So it should be a common practice when the shibarite feels that something may be wrong to ask if the ukete is really ok or not.

Think of the rare case of a driving accident in the same way as the one in a thousand case of a rope accident. Even if the person in the accident were to protest that they are fine, anyone would take them to the hospital or at least watch over them for a period of time. This situation should be a relatable simulation for possible rope injuries.

Having the courage to stop

So far, I have reviewed what many people have said about tying accidents. Now, I want to get to the main topic.

It’s not too much to say that our behavior is defined by our instinct of self-protection. We can make all sorts of excuses for “what we don’t do”, “what we can’t do”, and “what can’t be helped” at work, in study and in interpersonal relationships. In most cases of interpersonal conflicts, we readily assume that it is not ourselves but other people that should be blamed. In other words, we human beings, are very good at protecting ourselves; it is in our instinct to do so.

The same could be said about the following :

Human beings can lie very easily to not only other people but also ourselves, and oftentimes we don’t notice that we are lying in most situations.

“It would cause a problem to stop so I ignored the strange feeling I felt,”

“I thought that it was OK because that teacher said so.”

If you are a person who ties, it’s natural to want to look cool when doing so. Natural to want to control and move the rope as you imagine it and make your model moan with pleasure. Even the humblest person would not deny that he/she feels this way when they are tying.

Although much less in recent times, there still are people who blame the model by saying, “You are not a real masochist,” when he/she gives up in the middle of being tied. The very same person might also make the excuse “Today was the first time tying you,” when the model complains that he/she is not satisfied.

To those that have said such things, I don’t mean to blame them. Rather I want to empathize that no matter the person, everyone has a time when they feel this way.

In the end, if there is a path to choose, I hope that everyone will hold on to their courage and when one thinks a rope tie is sub par or overly dangerous, etc, don’t take a chance. Even if you are in the unfortunate situation of hearing someone praise another person’s rope for being so tight and feeling so good, within your heart you should praise yourself for not take risks when you didn’t feel confident to. In such a situation praise your courage to say no. 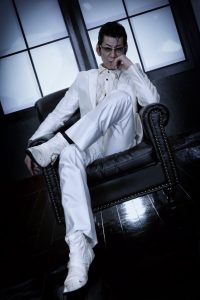 Now, I want to talk to the ukete.

Avoiding accidents is not only the responsibility of the shibarite. When someone being tied gets to the point of feeling that something isn’t right and actually wants to stop, everyone should realize exactly how much courage is needed to do so.

(*translator’s note: please understand this sentence in the Japanese context that saying no or directly refusing is culturally not common place though there are comparable situations in western culture)

In other words, I want to emphasize that anyone being tied should also have the courage to stop when they feel something is wrong.

Exactly when and to what point is it ok to keep pushing the limits in kinbaku is very difficult to say. When a person tied is starstruck thinking this “amazing famous” person is tying someone like me, it takes a lot of courage to say stop. Furthermore, their fear of stopping in the middle of a session doesn’t recede when they become gripped with such fears as, “maybe he/ she won’t tie me anymore” or “they won’t think i’m a real submissive.”

Can all ukete clearly answer the question if the pain they feel tied is an acceptable level or if the degree of strangeness they may feel is ok? If you yourself are not sure, then there is no way that a shibarite would know.

Even if the shibarite can imagine your situation in ropes, they cannot perfectly grasp your real feelings. Before I said that if someone deems their tying or the way he/she has tied someone to be below standard or dangerous, they should have the courage to stop. Vice versa, a person being tied also should have the courage when they deem the situation precarious to stop, don’t you think? Can we agree that no ukete should be faulted or blamed for trying to protect themselves from injury?

If a shibarite were to make the excuse that the last time they tied you harshly, they just assumed this time would also be ok, how would you feel?

Injuries in kinbaku are unfortunate for both parties. Due to injuries, there are those that cannot be tied again and there are also those that don’t want to pick up the ropes again.

In handing your “self” over to a shibarite, you risk losing your ability to experience rope again for just one moment of pleasure. Don’t you think you should reconsider that possibility?

Well, we as people in the perverted world of kinbaku are like idiots who despite discovering a naked knife regardless, decide to engage in a chanbara fight is ; we cannot simply give up on our sexual perversions.

So the least that can be done is to make this chanbara fight a little more safer to, in the long term, make it a situation in which neither person involved begins to despise their participation.

I hope that everyone enjoy their lives in kinbaku.

Translated by Mai and Desi La