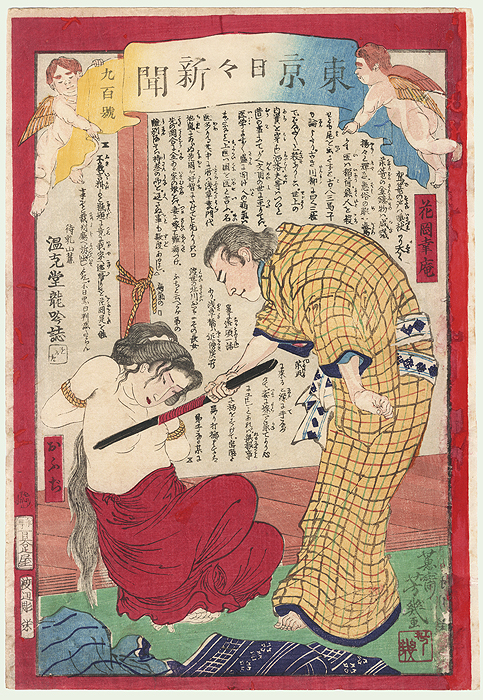 Physician Torturing His Wife, 1874 – Dramatic image of a physician torturing his wife from a series of sensational illustrations done by Yoshiiku for the Tokyo nichinichi shinbun newspaper. In this scene, a doctor from Asakusa named Hanaoka Koan threatens his wife, Ofuji, to force her to admit to infidelity so that he can divorce her. The physician swindled many rich families by marrying and then divorcing their daughters without returning the dowries. He has tied the poor beauty to a post after stripping off her robes, leaning over her with a menacing frown as she hangs her head in despair.

Tokyo nichinichi shinbun – Interesting subject from a series of sensational illustrations done by Yoshiiku for the “Tokyo nichinichi shinbun” newspaper during the Meiji era. These often dramatic images depict contemporary events in the news, including murders, robberies, and assaults, as well as suicides, fires, natural disasters, battles and campaigns, and even supernatural occurrences. Rendered in lively colors, each illustration is accompanied by a story in text. The title cartouche takes the form of a banner held by two winged cherubs, an interesting Western touch. These bold designs offer a terrific look into the daily life of Meiji era Japan.

From the collection of Zetsu Nawa