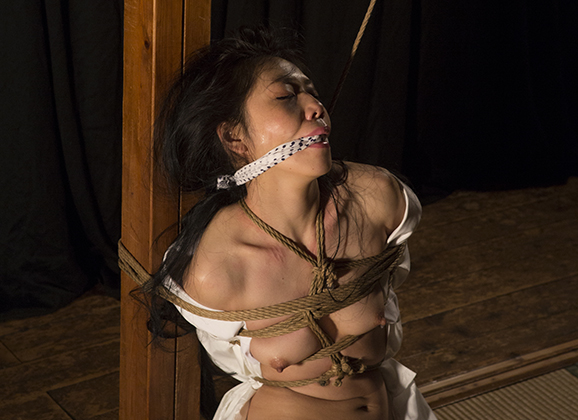 My introduction to kinbaku came in the form of an image on a computer screen 20 years ago. It was unlike anything I had ever seen before and set me on a journey that would bring me full circle. The image I would later learn was created by Sugiura Norio and this past Saturday, I found myself flying from Los Angeles to Tokyo to participate with a group of fellow photographers in Sugiura Sensei’s “satsueikai” (photography group shoot).

Two years ago, I was introduced to many of the great bakushi in Tokyo by my teacher Master K, including Naka Akira, who would be doing the tying for the afternoon. Naka Sensei is truly inspirational in his rope work and the opportunity to photograph him up close just made the workshop that much more of a once-in-a-lifetime experience.

Within a few minutes of arriving, Sugiura Sensei had come in to greet us and was enthusiastically looking at my camera and going over the various settings with me, iso, shutter speed, white balance, discussing lighting and how the day would proceed. It was a surreal moment. Here I was sitting in Tokyo, speaking with Sugiura Norio and getting ready to shoot alongside him for the next 8 hours. I was so excited that I immediately sent a text back to my partner “OMG, Sugiura just helped me set up my camera!” to which she wisely responded, “Well you better pay attention and stop texting in class!” Of course she was right, but I just had to share my enthusiasm. I was doubly delighted by Sugiura Sensei’s excellent English, which made the whole day much easier than I anticipated.

I was also delighted to see Naka Sensei once again, who I had the pleasure of visiting with last time I was in Tokyo in July this year. He was, as always, full of good humor and very friendly and welcoming. His rope, as to be expected, was inspiring.

The shoot was held in an old style Japanese house (as I understand it, it is owned by Naka Sensei) in Roppongi, which has the feel of many of the older Showa-style kinbaku photos I first admired, and was influenced by, in my appreciation of the art.

The model for the day, Shizuki Iroha (who I had also had the chance to meet and visit with last trip) was introduced and we set off to work. She posed briefly allowing for the first set of photos. Sugiura Sensei gave subtle and gentle guidance about position and how to hold her head as the sounds of shutters opening and closing filled the room. And then we were off.

For the first session, there were a dozen photographers, arranged in three groups with color-coded armbands. As each color was called, that group would be given preference for position and allowed to shoot for a few minutes until the next group was called. The second session after lunch was a smaller group of seven photographers.

Sugiura Sensei spent most of his time during the photo sessions directing assistants to move the lights to different positions and moving back and forth making small adjustments in Shizuki San’s position. While Naka Sensei tied, they would discuss different ideas and possible arrangements. I could sense a strong partnership between bakushi and photographer as they worked together to create some beautiful opportunities for us to photograph.

Periodically, Sugiura Sensei would give me advice, “move there” or “get closer” or “shoot that!” During one photo set, I hear him call out my name. I stop shooting look up and he beckons me over. He points to a spot on the floor and motions for me to kneel down. I do and he nods enthusiastically. When I point the camera and look, I see the shot he is directing me toward and for a brief moment, I feel like I see the model through Sugiura Sensei’s eyes.

As each tie progressed, Shizuki San seemed to feel the rope more deeply, on several occasions being moved to tears. The tears came not from the pain or endurance of difficult suspensions, but at times of quiet after the intensity of the tie had passed. It was very moving to watch, a personal expression of how deeply moved she had been by the experience of Naka Sensei’s rope.

To photograph such a moment is always a struggle for me. On one hand, it is a moment of such beauty that capturing it is the essence of what I love about kinbaku photography. But it is also a moment so deeply personal and private, a moment where the model is so exposed and vulnerable that the obligation to capture and reflect it accurately is immense. For that photo to be worthy, it must be equal to the moment. A very high standard to meet!

This is what has always moved me about Sugiura Sensei’s photography, his ability to capture and distill the essence of the moment–to capture the feeling. He is able to show on the outside what the model is feeling inside. And I watched carefully, trying to see how he does this.

I took careful note of how each set was lit. We shot with tungsten lighting, though when we spoke later, he confirmed when shooting solo he uses strobes. The combination of keeping the lighting tight on the subject and lighting from the sides and back, produce a feeling of both strength and solitude for the model and allowed for some dramatic shadowing in each set.

But the true moments of fascination for me were watching when something captured the attention and passion of Sugiura Sensei. He would quickly move to grab his camera and begin shouting instructions for lighting and to the model. His instructions grew more demanding as he shot, wanting more and more from her, pushing her harder and harder for the feelings and expressions he wanted to see.

In my study of rope with Master K in Los Angeles, we spend a lot of time talking about connection and communication through our tying and our rope. I have always thought of kinbaku photography as a way to capture that connection between bakushi and model and preserve it. Watching Sugiura Sensei shoot revealed to me how the photographer can create something that is also very special and very moving. There is emotion, connection, passion, and desire. But there is also a demand. When I asked Sugiura Sensei later what he was saying when he was instructing Shizuki San, he explained to me that he always wanted “more.”

I did not understand the words, but the sentiment was clear: give me more of yourself, give me everything until there is nothing left. And time after time Shizuki San responded and did just that.

Even with more than a dozen people in the room, I could sense Sugiura Sensei’s ability to create and foster an immediate and powerful connection, as he shot, pulling out from her exactly what he wanted and capturing it. We were all voyeurs in that moment, hoping to capture a part of what he was creating. There is a difference between creating that moment and witnessing it. And I could see Sugiura Sensei’s passion creating the moment, the connection and communication with Shizuki San that would make that moment a special thing to capture.

As I looked at the pictures I took, I tried to focus on the ones which moved me the most, which ones created a feeling for me that reminded me of the connection and intimacy I felt during the day. I kept returning to the struggle I felt. Was I capturing what was so beautifully and elegantly revealed to me during that day? Was I being honest to the moment and truthful to my own feelings? It would not be enough to simply capture the beauty of Naka Sensei’s rope or to simply record what had happened during the day. I would have hundreds of images that would do that.

I was invited by Sugiura Sensei to send a few words and images that would help explain what I captured and felt that day and below are the images I have selected.

There were so many feelings to sort through and so many pictures! I hope that these pictures not only convey the beauty of Naka Sensei’s rope, the grace of Shizuki San’s beauty, and the artistry of Sugiura Sensei’s lighting and instruction, but also the feelings of joy and admiration I had for all that helped make it such a special day.

All that remains is to express my deep thanks and gratitude to Sugiura Sensei, Naka Sensei and Shizuki San for an amazing day and experience and for how much I learned from each of you!

All images taken by Zetsu at Norio Sugiura’s photo session used with permission.