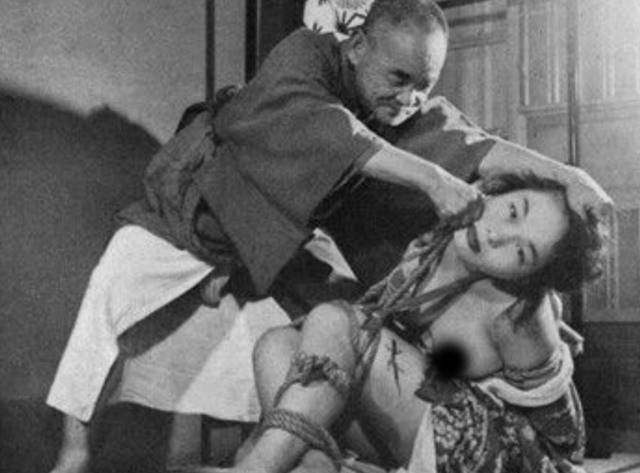 There is probably no greater debate in rope circles today then the question of whether or not shibari is “sexual.” Whether you suggest it is or isn’t, you are going to draw responses that are intense, vitriolic and deeply personal.

For me, the question is an important one.

First, I want to say that eroticism is something that goes beyond a narrow definition of sex. For me, sex is a physical act. And while it is one very clear expression of eroticism, it is only one expression of it. Eroticism is, for me, something that happens in the mind, not the body. It is, for want of a better term, what turns us on, what gets us excited. It is about imagination and fantasy. It produces a feeling of “sexual excitement” that may or may not result in sexual activity.

Eroticism is about stimulation, excitement, and, above all else, fantasy.

That distinction is an important one.

The most important reason why, for me at least, is because to remove that element is to forget something extremely important. Shibari has a history and that history, I want to argue, should be remembered as part of the very fabric and the essence of what we do today.

The history I am referring to is not the long-fabled story of Japanese samurai, hojojutsu, and Ukiyo geisha bound with kimono obi. Nor is it a story of beautiful art and ties.

It is the story of people’s lives.

There is an essay from Kitan Club in 1953 by Tsujimura Takashi titled “The Psychological Impulse to do Seme” that engages a number of readers of the magazine in a roundtable discussion about why they enjoy rope and SM. The various participants discuss some of their earliest memories and fantasies and what inspires them to do SM play in the bedroom.

What struck me as a read the piece was the degree to which those kinds of practices needed to remain hidden, much more than they do today.

It one sense, it is story of a group of people with what were considered strange, perverted, and abnormal desires finding each other and beginning the process of discovering they weren’t alone.

Those who chose to pursue kinbaku, especially professionally, didn’t do it for the money, as there wasn’t much of that. They did it out of passion and desire. As Ugo descibes it “Nureki, Osada and Akechi (also Ito and Minomura) weren’t good in business. Of course, they all had families and therefore had to earn money to some extent. But if they had to choose between money and no SM or SM and no money, they would definitely choose the latter.”

The two stories that strike the deepest chord with me involve Akechi Denki and Nureki Chimuo. Akechi’s funeral was the first time his adult children learned what he did professionally. His daughter, however, was not told and may still not know to his day that her father was one of the best know rope artists of all time. Similarly, Nureki’s family has kept the site of his grave a secret, as to not have it visited by fans or even students of his rope.

Throughout their careers, bakushi, models, directors, and producers all used (and still use) pseudonyms to protect their identities and reputations.

Those of us who do rope today in the style we do, can only do so because of the price of a small group of people paid and who sacrificed a great deal to make that possible.

Like many of the people I read about in Japan in the 1950s, I felt alone.

There are a wealth of terms you can use: bondage, rope bondage, getting tied up, rope art, western rope, decorative roe, fusion rope, Japanese-inspired rope, and dozens more.

Please use those instead.