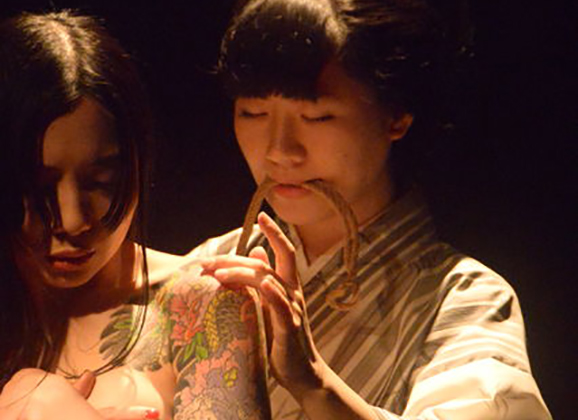 Hourai Kasumi is coming to Europe to teach twice this Spring – for a five-day Master Class in Rome 24-28th of February, and for a weekend workshop in Stockholm 29-31st of May. Her website is here.

Bergborg: Kasumi-san, How would you describe your style of tying? What do you like?

Kasumi Hourai: I like to think about my style as water which flexibly changes its shape depending on the vessel. I consciously change it, for example depending on what the model wears – a Japanese Kimono or Western clothes, or depending on the room in which I tie, on the physical condition of the model, and what I seek in the shibari I am doing. One of my favourite things is using a gag when I tie, especially a gag from old times.

BB: In an earlier interview, with ”Ropecast”, you told a story about experiencing being tied up at 17, but in an ”ugly” way, and that you wanted to learn how to tie ”beautifully”. Could you tell us something about your ideas about ”beauty” in rope bondage?

KH: The expression of the model should be drawn by the rope. It’s no good when only the rope pattern looks neat and nice.

BB: If I have understood correctly, you are also knowledgeable about Japanese practices of the tea-ceremony, and of flower arrangement (”Ikebana”). Can you tell us something about how these practices influence your ideas of beauty in rope bondage?

KH. They are an influence for sure. In conduct, mind, manners.

BB: Would you use the concepts of いき (Iki) or rather of 侘寂 (Wabi-Sabi) to describe your style of rope bondage, or some other concepts from the Japanese aesthetic traditions?

KH. There are times when I strive to express Wabi-Sabi, but also times when I don’t do it. To express Wabi-Sabi, there is for example a need for proper clothes matched with the season and the atomosphere of the place. If this is possible to prepare, then I try. But it is quite costly and time consuming and takes a big effort, so I seldom do it. ”Mercy”, ”generosity” and ”motherhood” (慈悲と寛容、母性) are words which has been used to describe my style.

BB: You have been active doing rope bondage for many years. How has the focus of your interest changed over time? Are there any important turning points that you would like to tell us about? Could you tell us about a typical week of your life right now?

KH: It basically haven’t changed. I like the Gote and I don’t get very excited by forms other than the Gote, like Maete [front hands] and Teppo [rifle tie]. My basic taste hasn’t really changed. And I would say there has not been any important turning points yet. Everyday there is small happiness and appreciation. I think about my schedule on a monthly basis. I have 2 to 4 days off per month. I am fortunate to have been able to do Kinbaku as my job for 16 years.

BB: You have done workshops in the USA and in Australia, and this Spring you will teach twice in Europe. Do you teach also in Japan? Do you have a special Deshi? What is the most common topic that the people you teach, in your opinion, would need to improve?

KH: I teach in Japan, too. My only Deshi are Towa-san and Nara-san. Especially Towa-san is a talented female Kinbakushi who is capable of taking an active role worldwide. First of all, to build a strong spirit is important for students. There are many people who have a weak spirit. It is a good opportunity when you are worried or facing some troubles. It takes mental power to make you move forward without giving up, repeat the basics diligently and politely, and remember what state of mind one was in at first. The technique is not only doing things as you are told. It’s about a technical strength which enables you to find the rope you seek and the rope suitable for the partner you tie now.

BB: You have webpage with very beautiful images, your work has been published in some Japanese SM magazines, and you have also produced (as far as I know) four DVDs. I understand you are working on a photo-project about ‘The Four seasons in Japan and Kinbaku’. Could you tell us something about your collaborations with different photographers? Do you have a favourite photographer that you would like to work with?

KH. Patric Siboni’s images are great. It is my dream to work with photographers like him. Not just him, but photographers outside Japan sometimes use a different technique to capture the space three-dimentionally that I find splendid. Indeed, I have been working on the theme of ‘Four seasons in Japan and Kinbaku’. I would be happy if foreigners would get an interest in Japan after seeing these images and I hope the number of tourists visiting Japan increases (lol).

BB: In the description of your upcoming workshops in Rome, in addition to Akechi Denki and Kinoko Hajime as nawashi that have been important for you, you mention also Kitagawa. Could you tell us something more about your relation to his style of rope-bondage? Is there something special that you appreciate?

KH: I first met Mr. Kitagawa more than 10 years ago. I love his typically Japanese-style of rope. By that, I mean that in his rope style one thing leads to the next. It is a bit like Japanese Kaiseki cuisine [懐石]. I respect and admire him.

BB: Returning to the question about the tea ceremony, I would be very interested to hear if you would like to say something about your own movements when tying. Relating to this, I am also interested in how you would describe the movements of the person being tied (meditative stillness, crying, laughing, resisting, fighting…)? In what sense is rope bondage communication and improvisation for you?

KH: The communication of rope means making the distance between myself and the partner smaller, and to synchronise our souls by tying. There are people who I am not able synchronise with (lol), as it’s about affinity. But I try to synchronise as much as possible. I think that the tea ceremony, the flower arrangement and all other Japanese culture has a common aspect in that we treat objects dearly, as every object has a soul. I try to treat my rope as a flower. If the rope is not handled with affection, its beauty / charm / luster / flirtatious quality [translators note: this one word 艶 has quite many meanings] does not come out and it becomes mindless. (This might be a Buddhist-like thought. I don’t have a specific belief, but I guess it’s a typical Japanese way of thinking…) An object has an intention when I put my heart in it. An aura surrounds it. I believe so. Also, I think that a great beauty is born in Kinbaku when we synchronise emotions with eachother. Treating the rope dearly, thinking about the expression of the rope, is the same as in flower arrangement. It is about treating the flowers dearly and looking at the expression of the flowers. An other common point with flower arrangement is that which flowers are suitable can be different, depending on which flower vase is used. Each model must be met with a different rope bondage which makes them look the best. This subject is difficult to explain. It’s the most difficult question to answer and to express my thoughts properly. But I like this question. Thank you.

BB: I recently read an interview with Akira Naka, where he said: ”I have a feeling that I am not sadistic by nature. I think I am rather masochistic.” That surprised me! What role does pain have in your style of rope-bondage? Would you describe yourself as a sadist?

KH: I think I would say the same as Mr. Naka. I think I have the M-type character in me. That doesn’t mean that one is a slave in an SM context, and it is also not about a masochistic tendency such as liking painful stuff. M-type, in my view, is about serving. Tying one’s best to make the M-Jo [the model] feel good – this is truly the M-type mentality. Tying them up is serving them, isn’t it? I have the M-type mind – it makes me tie for the partner.

KH: It was about 15 years ago. I met him when I was 19, or possible 20 years old. I came across with his name in an SM magazine, when I was still in school. I was crazy about his shibari. I loved it so much. I started to work as a professional dominatrix at an SM dungeon after I became an adult. But that was not the world of rope. The SM dungeon was the world of Mistresses and slaves. It was not what I was seeking, so I left the SM dungeon and moved to Tokyo from Nagoya because I wanted to meet Akechi sensei. I never did a show nor a DVD with him. (Akechi sensei and me? I wonder if I should have done it when I was younger and prettier. lol…) The lessons I learned from him has mainly to do with mental aspects. When doing severe torture, you also have to prepare your spirit for it. An important detail: Do not hit your model with the Nawajiri [the end of the rope] by accident. It means, you have to use your senses and pay attention to the whole of the 7 meters of rope and respect your model. Then enjoy rope.

BB: To close – let me ask: What question you would like to be asked the next time you are interviewed?

KH: I would like to have the questions asked in Japanese. Hehe. [Translators note: This sentence written in English by Kasumi Hourai]
I liked the questions particular to Japan – Wabi-Sabi, flower arrangement, etc. I hope more foreigners who love Kinbaku will visit Japan, so I welcome questions which might make them curious about Japanese culture, landscape and our heart. It is like a Zen dialogue which doesn’t have a defined answer. Thoughts can have implications anyway. Ambiguity is the essence of the country of Japan. It is a country which has over a 1000 years of history but in which the old things and the latest technology merge together. Our way of thinking (words and thoughts) are ambiguous although we are very much to the point. With expecting this contradiction, please come to Japan!

* Translation by Nana (London), commissioned and edited by Bergborg.

A Gallery of Hourai Kasumi’s Work