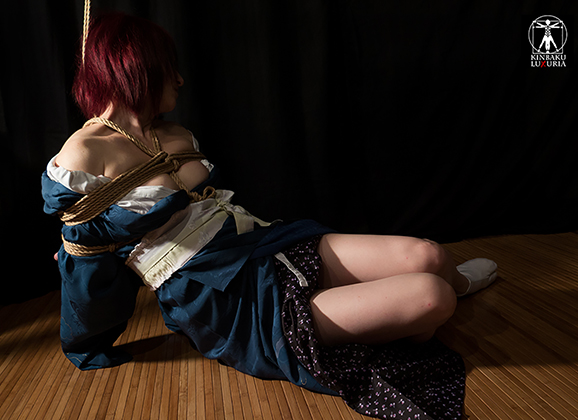 Starting to write down my thoughts on this subject, my memory goes back to 2011, when, after the first time we attended London festival, we decided to experiment tying with a Kimono, so much impressed by the Japanese crew of Ichi Nawa Kai.

I clearly remember that, after experiencing lots of Shibari usually all naked, my feelings were incredibly new. I defined for example being covered with the Kimono after the tying a “reverse rape”.

I started immediately perceiving the potential on me, even if I am a Western woman and I could never turn into a Japanese, of the act of being undressed progressively, and how this was affecting my reactions in a different way.

It has been now more than three years that I’m tied, especially for shows of course, in a Kimono. Japanese clothing plays a very important part on the reactions a model can have when tied. I shared this feeling quite often in a vague way, because, believe me, it’s not at all easy to describe it, with all the rope friends that had never tried before, suggesting them to try once in their lives.

And every one of them affirmed after trying that the feeling was completely different: I saw models usually in control crying because they were undressed IN and UNDER the ropes.

So, what is this about?

The cut of a Kimono is very straight and narrow. It shapes the body not exalting the curves and the femininity, instead, it hides the body, and limits movements, for example, allowing only tiny baby steps. It protects, hides flaws, makes you elegant and distant, like an elegant, untouchable doll.

Think that even for Geishas, not only the Kimono hides their body, but the whitening make up masks the face, so all the natural skin is unseen, apart from the narrow area of the neck, this means that Japanese men have only a limited chance for visual evaluation of the physical beauty. (ref. “Modern Japan: Origins of the Mind: Japanese Mentality and Tradition in Contemporary Life”, Alexsander Prasol).

This covering/masking and the consequent “uncovering-unmasking” effect I think worked a lot on me, even if I’m a Westerner.

When I started being tied in a Kimono, this enhanced the value of time and progression, as my skin and nudity was revealed step by step, and the act itself became more “submitting”: infact, it wasn’t me anymore who could decide to get undressed by myself from the beginning, I should yeld control even on something so intimate, letting the Rigger do it when he pleased during the session.

So, this means, when I was already imprisoned, caught, and it was impossible for me to stop it… This has a powerful psychological effect on the degree of power release and the level of abandonment required and implied.

I watched recently a Pink Eiga movie titled “Sweet Whip”. The story is about a woman that, after having been kidnapped and raped when she was only 17 years old, turn when grown up into a professional slave for a SM club somehow to “exorcise” that experience and to live again those special feelings she experienced during that tragic situation, that anyhow revealed her masochist side. In the present time she is now very used to agree with every kind of torture that customers ask her to perform in the SM club, but one night, one of customers asks the Mistress and Owner of the Club to make her dress in Kimono, to make her wear a fundoshi, and then be tied and abused.

Even if this is clearly a movie, you could see her face actually changing expression, and the most interesting detail is that the customer, all happy, claims: “only Japanese Bondage can do this”, referring to the shame visible in her reactions because she’s been masturbated with the Fundoshi.

Dressed, then, and abused..

But my story doesn’t finish here.. After all these years of online shopping and our visit to Japan, my collection of Japanese clothing obviously increased both in Kimonos, accessories and Nagajuban, the underwear usually worn under the Kimono.

In the past I used to wear Kimono OR, alternatively, a Nagajuban for a session, but in the occasion of our first Salon last December, I decided to dress them properly, the two together. And this is what made the REAL difference.

I think that the Hashira session we had turned to be one of the hottest of the last months.

The feeling of protection and coverage is of course doubled by the fact you wear TWO layers. This allows the Rigger to take even more time to remove clothes, show the body, take control.

This new stage made me realize how much wearing the only Kimono was actually up to then limiting the range of feelings I could live. The real deal was created by the Kimono and the Nagajuban, together.

The feeling this magical mix produces on the model is.. an unstoppable layer by layer revelation, both physical and psychological. The smooth warm silk of the Kimono is light, and rustles on the fresh cotton of the Nagajuban, that touches directly the skin and thus producing uncontrollable shivers.

The different fabrics sound, and they produce vibes rubbing against each other and against the skin. They weigh more on the body. You can actually feel them.

It’s like letting go different masks, one after another.

Undressing a soul while revealing more and more of the body.

It’s like removing different layers of make up from your face.

Progressively you can see the real colour of your skin, your real self.

Because once the Kimono is gone, the play is not finished.

Further expectations are created, because there is yet a new layer to be ripped off, both for the Rigger and the model, and eventually, the ones who look..

This amplified undressing process is a metaphor for going deeper and deeper to the nude self.

But to discover it, you should take the right time, and the right care, and let all the coverings, conditionings, protections fall down. One after another.