In the early 1950s, kinbaku and kinbaku photography was something new. The pictures that were created in that era has a feel to them that marks them somewhat indelibly as from that particular era. In looking through some of these older images, particularly ones from the early 1950s, I find that the power of the image comes from the story that is being told. Much like the American bondage magazines of the 1970s and 1980s or even the earlier works of artists and photographers like John Willie and Irving Klaw, there is a certain romantic innocence that almost defines the images and the stories they tell.

I can’t help but think in today’s world, we’ve lost some of the magic that those stories used hold. 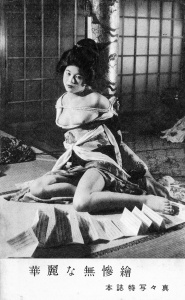 As Japan struggled with major questions of national identity post-war and post Empire, the images of the time reflect a moment in time where less was more. Eyes, expression, pose, and emotion ruled the day and rope was merely a means to tell a story, to share a moment, or make us see things in a new light. It was a time when images like these were difficult to come by and not a dime a dozen. These pictures were gateways to imagination, to dreams and fantasies. Beautiful and taboo. Forbidden and alluring.

We’ve lost, in some ways, I think the ability to enjoy, admire and appreciate the past. We confuse excess, noise, color, and flair for drama.

I invite you to take a moment and reflect on two compelling images from 1954, Fuzoku Soshi, vol 1. Rope from a time when less was more.