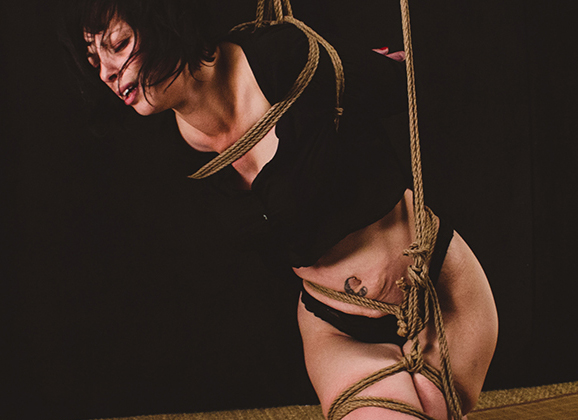 To explain how it began, I need to think back to the time before the ropes. I was just curious about BDSM and didn’t know anything about that kind of practice. I was mostly interested by the frame of mind that was specific to domination and found most of the practices too hard for me to play. This is when I saw the first pictures about Japanese rope bondage, there was not so much of them at that time on the web, and I immediately thought it was soft and sensual but quite difficult to learn. In reality, I fell in love with rope, but I was still unable to consider getting into it deeply.

I spent a couple of years doing odd job with ropes and mixing Japanese and Western rope bondage, actually only making a mess. During that time there were more and more pictures and videos available on the web, and even if I didn’t understand everything about them, my mind fell deeper and deeper in ropes.

I now have to go back to the moment I consider as being the first step and to a triggering factor which is not a small detail. The latter one was the meeting with a muse, somebody as much interested by Japanese rope bondage as I was. We discovered together a great passion for ropes on both sides, top and bottom.

Since this moment, we have learnt and progressed together, slowly developing our technical skills and trying different stuff. There were not much tutorials, books nor workshops at that time. Learning was the result of looking at video performances and dissecting them step by step, trying to understand point by point. Searching about safety, and progressing with feedback to increase what we were doing, more and more.

We began to practice as much as possible and quickly did suspensions with more transitions as weeks passed by. But we eventually were confronted to a limit: the time had come to learn to be much more precise on tensions, the structure and ropes positioning.

Months and months passed in this direction, when a new feeling awakened… Looking at more experienced friends’ sessions, it seemed my ropework was lacking something important. It was pretty difficult to understand what, so I decided to have my second tuition. What came out was the connection with the bottom, the purpose was not reduced to the only research of the aestheticism of the patterns, but also to guide the tied person into a nice travel in your ropes.

Noticing this in others’ ropes touched my heart and spirit deeply. But, as odd as it may seem, this moment marked the beginning of a long and strange period. I could feel the connection but was totally unable to create the vibes.

As time passed by I saw how much my ropes were far to what I could feel and experimenting. That was very upsetting but we kept on working, focusing on how to increase the intensity.
With a little hindsight, I think that, on the contrary of what I thought at this moment, I had not found my answers, and this is when I discovered what I consider as being a new start in my own way into kinbaku: the time for torture rope bondage, Semenawa.

The purpose changes again. We do not consider anymore the only aesthetic of ropes but it is about looking to have a global aesthetic, the body position overrides the bondage. And more than the connection, we try to create emotions and highlight them, much more than only having a trip in our ropes. Semenawa is about exposure, not only of the body but also of the psychological state. Probably is it about voyeurism, but I love to see intimate parts of the body and also of the mind exposed. It is a sort of vicious circle, in which we create from physical and psychological suffering, and the more intense is the suffering the more we push away the limits of the body and the spirit.

I felt the need to take a tuition again, and as it was mainly about the connection, again… I could feel but not apply. As everyone can expect, at the beginning, I did not understand anything (on the contrary of what I was thinking at this precise moment). It was just in front of my spirit, but I couldn’t free it in a good way. My ropes became harder in a nasty way. When I analyze this period today, I can remember bad energy, using ropes as an outlet of brutality and aggressiveness. Making of kinbaku a kind of revenge on certain problems of our life instead of using its intensity to convert these negative feelings in a positive strength common and shared with my muse.

It took months and months before we had a big discussion with my muse. What came out started a better way of comprehension and what we shared after was better and better.
A few months after, I had the luck to watch at a pretty nice video, it was a very simple session of semenawa executed by the master of this style. I can’t really explain today what happened, but my feeling now is that it opened my eyes. All that my friends had told about connection and semenawa became limpid.

It’s very hard sometimes to admit that it was just in front of my spirit, that my friend had explained it, but I was probably just not ready for that. What changed really since that is that I now can tie with the serenity I had been looking for since a long time. My muse and I are just having pleasure with ropes as we could never have expected since we had met. It opened a new period of progress, which we probably are just at the premises of.

It’s very difficult to know what the next steps in evolving will be. But, what I can say for now, after observing my way into ropes since the beginning, is that I will probably keep on feeling going through new paths and that I should still misinterpret lots of things at first before finding a better understanding of them.

The line of thought about kinbaku is a perpetual motion of questioning about who you are, about what you do, about how and why you do things and about with whom you do them. Humility is necessary to question oneself all the time.

Throwing oneself deeper and deeper into kinbaku is a very personal endless quest that we can consider as an intense and tempestuous human adventure.