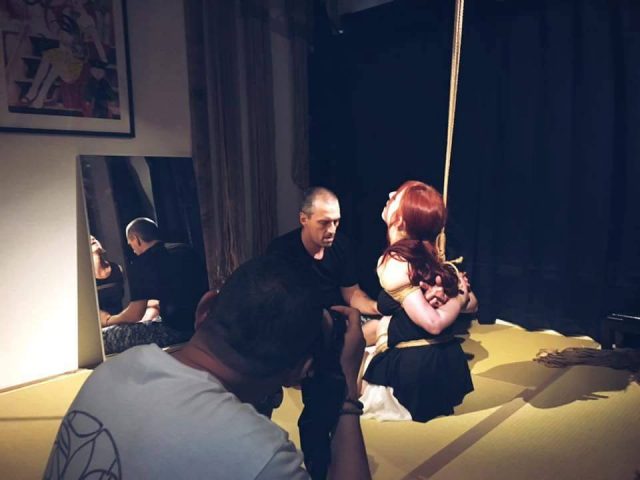 In our recent trip to Tokyo we had the luck as usual to take private tuition with Naka Akira Sensei. In these days I’m already missing a lot the great atmosphere we always can breathe there, it’s like every time we go in Japan we can reconnect with the real spirit, and the reasons why we do Kinbaku…

This time it happens to me that when I go back to the pics taken during class, there are a couple of them I particularly love, they tell me something more than others. And these are the pics were actually Iroha Shizuki was able to shoot not only Riccardo Wildties tying me… but Naka Sensei watching us, or taking pictures of us.
When I look at those shots, I have incredibly intense feelings.

I love thinking that he was watching.

I love seeing from Iroha’s shots where she was focusing her attention.

And this led me to think a little bit more about the importance of the presence of someone else looking the session, not just like a passive audience to a show, but participating with that intimate observation.

Since from Itoh Seiu, a lot of the lithographs from 1920 show not only a lady (or more) tied, but someone else in the scene, frequently just “watching” the scene. Minomura Kou used to tie his model, them bring her to a public place like a café and just expose her to the improvised audience, to humiliate her. Nureki Chimuo organized his Kinbiken sessions where he was tying only non professionals models, but only real housewives that wanted to experiment ropes, and of course there was an audience to make that happen. Kinbaku is made of three main actors. The one who ties, the one who’s tied, and the one who looks.

Being watched during a sexual activity/expression is for me arousing and shameful at the same time. Shame produces excitement. Then this magic circle enhances even more the effects.. as the shame you live (for letting someone see that you are excited), produces then much more excitement. It’s a loop that feeds itself.
I would define the particular pleasure we can have during a Kinbaku Session as Martymachli, the paraphilia which involves sexual attraction to having others watch the execution of a sexual act. So, having witnesses that can catch what’s happening, while you are vulnerable and you can’t escape to that curious, pervasive glance…

I still remember the shame and excitement I lived when we performed at the Naka Nawa Kai sessions at Studio6 in Roppongi, invited by Naka Sensei.

A real audience made of people who didn’t necessarily tie, but sometimes just dirty old guys that loved to watch.
That was extremely embarrassing and, again, arousing. The attention, the excitement, the surprise they were actually feeling made my experience in “performing” in front of someone else completely different from that moment on. Real people, very close, built up a very hot environment, as they were there, to watch like secret observers. A real act of voyeurism, not like in Europe where Kinbaku is more and more often circus on a disco stage, depriving completely the act of that magic and morbid taste that comes from the fact that it should be kept private, and hidden. That was an intimate, private happening and they were the few lucky allowed to assist.
What are then the components that make this triangle so incredibly exciting?

First I would say the proximity. You could be in front of people you know, or complete strangers, but the distance between you and those who are watching is very limited. They could almost touch you, but they’ll never do it. The transgression is that proximity itself.

Second, the apparent indifference. The ones who are watching can look detached but actually they are into it. That formal detachment is a sort of mask to veil the fact they like it so much.

Third, the blame. The ones who are watching and enjoying have usually mixed feelings: on one side, they consider the person being tied a sort of Goddess to be admired. On the other side, what you’re doing is showing yourself while doing something kinky, so there is even reproach, and an “inculpating” attitude from the audience.
That glance in the end that you have on your skin is at the same time adoring, and judging.
Makes you tremble and excites you.

For me, offering yourself to the scrutiny and the sexual arousal of the viewer, being watched while tied and tortured, is a supreme form of self nurturing exhibitionism that automatically forgives the sense of shame you feel when you’re doing it.