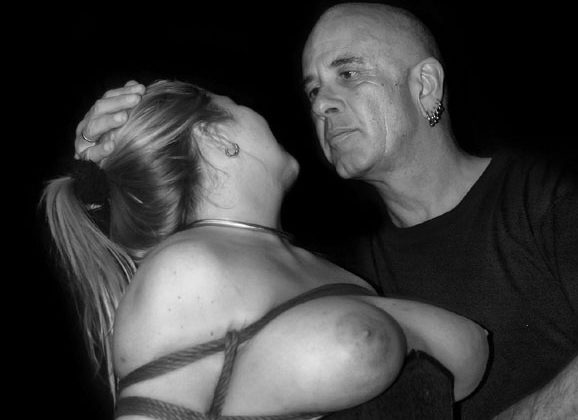 Japanese rope bondage or shibari consists of more than a rope artist and his model – in its most beautiful form it expresses devotion and, in accepting the devotion, love, security, tenderness. It means holding someone and being held, responsibility handed over and accepted. The apparent restriction of movement by the ties may become a deep inner liberation; the body, forced into different positions, reaches a near meditative peace.

Similar to the seated and motionless Buddhist monks, the safety of the expertly used rope can become the way to a trancelike condition of inner rest.

The Europeans first met with Japanese style bondage in the middle of the 1970s in small, badly printed magazines. Titles like “Cherry Blossoms” even then emphasized the romantic-lyrical element over the pornographic. Currently, books like Nobuyoshi Araki’s “Tokyo Lucky Hole,” published by one of Japan’s most respected and legitimate publishers of photographic books, the spreading and increasing importance of images on the Internet and films like “Tokyo Decadence” all show Japanese bondage as an original part of erotic culture in today’s Japan. Meanwhile Shibari even forms part of everyday Japanese advertising and PR (Chiemsee) and is currently being taught to the curious and interested public in workshops, via mailing lists and the famous website www.kikkou.com.

Naturally the question soon arose whether it is still shibari when western hands are tying the ropes around western bodies; even when the positions used are those derived from the basic forms of Japanese bondage. Using Japanese decorations like kimonos, bamboo, paper-covered sliding walls and bonsai, the western photographer tries to convey a mood similar to that in Japanese bondage photography. But still there is a decisive difference between the western and the eastern way of looking at things.

And so Bondage Project takes us to a world of beauty, of sensual dreams and of longings fulfilled. The observer is invited to a very personal journey and so becomes part of the magical triangle.

So You Are New To Shibari? How To Get Started