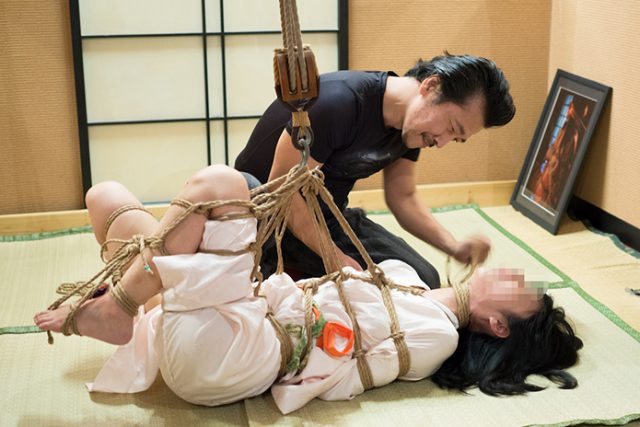 Walking with the SM kinbaku author Sakurai Yuki san from Sakuragichō-eki through Nogecho and over the Ōoka river in Yokohama, I had little idea of what to expect when we walked into Kamui Jyubei san’s Mumonbaku (無門縛 – no gate/absolutely free binding). My goal was to find out as much as I could about the mysterious Matsui Kenji san, a legendary influence on many respected kinbakushi who sadly died in 2013. Matsui san tied for several publications but always remained in the shadows, mysterious, and I wanted to understand what his relationship and the impact that he might have had on Kamui san was, himself revered as one of the current secret kinbakushi greats practically unknown outside of Japan.

Following our arrival and the introductory pleasantries with the accompanying Ugo san of smpedia.com and Mimi-chan, Kamui san was very surprised I knew anything about Matsui san at all. I explained that it was because I am interested in people and feeling, and in the real heart of kinbaku, seeking in my fortunate position to help others see wider horizons.

Kamui san began by explaining the timeline of the Black Heart club in Ginza, where in 1998 the reknowned Matsui san, already in his late fifties was the first teacher, assisted by Saikatsu san. Kamui san had first met Matsui san through Saikatsu san long before Black Heart opened in 1998. When Matsui san stopped teaching there in 2004, Akechi Denki san took over the role until his death in July 2005 and Saikatsu san then became the third teacher of Black Heart.

It was said that many people came to the great Akechi san asking to learn, but only Saikatsu san was with him for such a long period of time. People are naturally protective of their influences and their connections, and many want to apply the word deshi. Only a handful could hope to use the word in its wider context where Akechi san was concerned, eg. Kanna san. Saikatsu san was always an amateur nawashi, also known as Akechi Saiki (才鬼), but he rarely used the name himself even though Akechi san gave his permission. Saikatsu san still teaches shibari at Black Heart for advanced students today.

During the period of the late 1990s and early 2000s, Matsui san, Akechi san and Hayakawa Yoshikazu (Hige) san were often playing together as close friends. Hige san was the Editor-in-chief of S&M Sniper and instigator of the Hige Salon, a kind of nawakai held frequently in rented hotel rooms from 1991 until 2001 when it gained a permanent location every Friday in Hige san’s Mugen SM lounge in Roppongi. Mugen closed in 2006 and the Hige Salon reverted back to an infrequent gathering.

Matsui san always remained underground and meticulously avoided any images of himself, even though he was constantly tying for several kinbaku magazines and books. He was an extremely influencial amateur kinbakushi in a time where the model was still the star name. Nobody really knows when he started tying for publications, but it was probably during the late 1970s or early 1980s. He was deeply respected as one of the greats by the likes of Miura Takumi san, Kitagawa san, etc., but remains somewhat of a mystery even to the people who were close to him. Nobody knows when he started tying, but it could have been for private pleasure during the 1960s when kinbaku was hidden in the bedroom, when sado-masochism was a secretive play between consenting couples. He did once joke to Kamui san that his first experience was tying his female science teacher at school, which if true would put him tying in the 1950s. With no known images of his face, Matsui san will remain a mysterious legend of the Japanese kinbaku world, even though some of his ties can probably still be seen in the following generations of kinbakushi.

The first time Kamui san came across kinbaku was in a dirty, dingy strip joint in his home city of Sendai in the early 1980s and he believes it was somebody like Osada Eikechi san. He hated the show; the atmosphere of loud progressive rock music eg. Pink Floyd, the ugly treatment and crude vulgarity of the attempt to shock by throwing live snakes into the lap of the naked model, and the shibari techniques he found of no interest. It was SM as part of many Buto contemporary dance shows that would tour around the seedier strip joints of Japan during the 1970s and 1980s, more pornographic than sensual and erotic.

It wasn’t until 2000 that Kamui san became involved with kinbaku when he was running the Odyssey happening bar in Yokohama and eventually started presenting a kinbaku event entitled Mumonbaku in 2008. By chance he was asked to tie guests and discovered he had natural flair, but felt it was just a task and nothing more. Other guests would come to the club claiming to be very good at shibari, but he could see and was being told that he was much better, so he was encouraged to seek some coaching from a professional to perfect what he was already doing. He looked at three possibilities, Monko san, Black Heart in Ginza, but decided to enter Miura Takumi san’s Bakuyū-kai.

Miura san held a keen interest in archaic budo-hojōjutsu torinawa penal restraint techniques and had been researching the history and uncovering ties that had not been used since the end of the Edo period. Akechi Denki san became interested as he wanted to discover more about these ties that he might not know, so he supported the foundation of the first ever dojo to teach what Miura san had researched – Bakuyū-kai (縛友会 – binding together meeting) to teach these penal ties in 1996. No such system of formal teaching of rope tying in a martial art sense had existed since the abolition of the samurai with the Meiji restoration in 1868 when it had been a small part of military and police training. Miura san’s character suited his interpretation of the blending of karate and kendo school models applied for the first time to shibari.

Miura san then formulated four levels of attainment that would be expected to take his students to what he determined an appropriate qualification; stage 1: kokoroe no dan (心得の段) – honmusubi, koutōbu and gote shibari, stage 2: shogi no dan (初技の段) – hishi and agura shibari, where the gote shibari must be completed within twelve minutes, stage 3: chūgi no dan (中技の巻) – tawara and gyaku-ebi shibari and stage 4: jōgi no dan (上技級の段) – double-hishi, gote gasshou, teppou and shishikatame shibari, and kataashi zuri, plus development of the students original styles. Students would arrive and sit in the seiza position before there was a briefing on the dandori (programme) as if it were a martial art. They would then bow low to Miura san as the soudai before starting the gote shibari which was then checked by the three teachers, Miura san, Saikatsu san and Kitajin san, and if approved, each student would move onto their own programme depending on their personal progress.

While Miura san’s rigid system of fixed styles were taught at Bakuyū-kai, they were somewhat different to Akechi san’s approach of evolution and development of his own styles; also the natural way preferred by eg. Saikatsu san and Kamui san too. Ninety-nine percent of all students left Bakuyū-kai during stage 3 either not eager enough for kinbaku, as it would usually take two years to complete the final level, or to follow less authoritarian practices.

The final stage at Bakuyū-kai would allow the few remaining students to continue practising and developing their own styles, where Miura san would do spot tests, eg. making a thirty minute performance based around hishi shibari, judged by Miura san, Saikatsu san and Kitajin san, who would then retire to deliberate on their verdict, often failing their students many times. Only failing once, Kamui san cleared all four stages within one year and remained with Miura san’s dojo for a further year before becoming an instructor in 2008, but then moved on to concentrate on his Mumonbaku enterprise with a more free-flowing approach.

Kamui san explained how he felt kinbaku as performance; that there are predominantly three types of audience; the first, mostly men who wish little more than to see the lady naked or abused, the second, very much the dojo-type rope tops who want to see and learn shibari techniques from watching, and the final being the audience that want to see the kinbaku – to comprehend the beauty of the sado-erotic play using rope between two partners. The second type of technical shibari show can be very boring to all but aficionados to watch, while the third type is the only one that interests Kamui san – he is quite happy for there to be no voyeurs during kinbaku play and here we found a perfect meeting of minds; the main focus is between the two parties involved in the kinbaku. Anybody watching to enjoy this play is invisible, peripheral at best. Kinbaku demonstrated because it would need a deep human sexual-psychological understanding to teach.

To this end Kamui san does not perform with other famous kinbakushi in the big cities, although Ero Ouji has performed at his Mumonbaku studio in Yokohama. Kamui san opened an annex in 2014 at Jūrigi Suyama at the southern foot of Mount Fuji where he feels that he can demonstrate the sado-erotic beauty of kinbaku to the kind of audience who appreciates the connection and the magic of the play elements in a beautiful rural setting, and I thoroughly look forwards to his invitation to perform there with one of my lovely partners for him. We talked at length of how the direction of shibari performances are going and how the fun, excitement and emotions of the togetherness of play between the participants is often missing, forgotten, ignored or lost.

When Kamui san perfoms he avoids music and lighting. When I explained some of the event scenarios I have to deal with in the west, where incessant DJ techno beats destroys all atmosphere he was truly shocked. But we agreed that the best kinbaku, performance or otherwise is where the rope top arrives behind his or her partner with no idea where the tying or the play will go – it just happens naturally, as if it were in the bedroom – muganawa.

Before Kamui san invited me to demonstrate my own style, he imparted one of his little tricks that make pulling rope through a tight space easier, eg. the bend behind the knee with a folded leg, where instead of tying off the nawashiri ends of a line with traditional hitotsumusubi overhand knots, he forms a type of lengthened single crown splice, finished with a whipping that gives enough bulk for a hibarimusubi larks head to bite onto without being as bulky. He also showed me the wonderful results of his collaboration with the internationally renowned photographer Touhami Ennadre for his Journée du patrimoine Casablanca exhibition.

Then while our common model, Sakurai Yuki san fell into her sub-space contented, Kamui san demonstrated a Matsui Kenji san mitsu-hiki shibari (三つ引き), derived from a Japanese family heraldic crest design; a three-draw/pull full body tie using his own evolution of connections along the front of the body. He then brought Yuki san up to suspension using his block and tackle lifting technique Saikatsu san had taught him, suggesting it was one of Akechi san’s styles. Interestingly, as with Matsui san, Kamui san never uses nonojitome (nodome) knots, but rather a more attractive and symmetrical hibarimusubi-type connection similar to cuckhold’s necks, or a hitotsumusubi as a lashing.