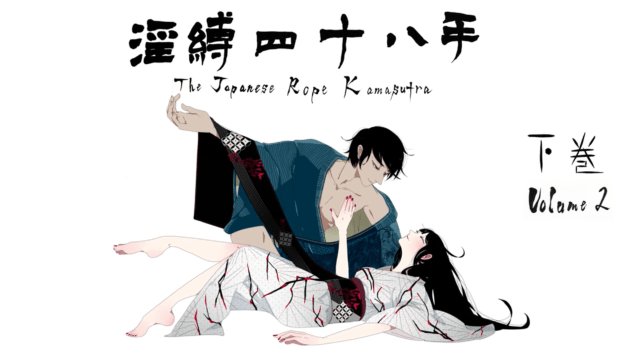 In 2020, thanks to a very successful Kickstarter campaign we delivered the first volume of Japanese Rope Kamasutra with  24 positions.  This year, we want to deliver the second half: 24 new positions. We also add multilingual electronic version: Japenese, English. French, German, Spanish, Portuguese, Italian, Greek, Chinese, Korean.

GO TO THE KICKSTARTER

My interest in rope originated from its potential in the bedroom. Using pressure, friction, coercion can widely enhance the intensity of intimate play. Very early on, I bought a pipe bed very useful for rope, and began putting everything I learned into practice in the bedroom. Talking with some friends about my discoveries, they encouraged me to write a book about it. As a result, I embarked on a journey to create a new Kamasutra for rope play.

In 2020, thanks to a very successful Kickstarter campaign we delivered the first volume of “Inbaku Shijuhatte” (淫縛四十八手). It had the first 24 positions of our rope Kamasutra. It s an artistic, not pornographic, full color A4 illustration book with beautifully drawn illustrations alongside a little helper text to explain the benefits and technicalities of each position.

Anyone who knows about rope may reproduce the positions easily. For those who don’t know rope, I m sure this book may become great motivation to learn.

Read the Reviews of The Japanese Rope Kamasutra Volume 1

The Japanese version of the Kamasutra is called Shijuhatte (四十八手), and it features a total of 48 traditional sex positions. We thought long and hard on a name for the rope version, and we settled on “Inbaku Shijuhatte” (淫縛四十八手), which is a play on words that transforms the more serious word for rope, kinbaku, into inbaku, which can be translated as indecent rope. The title can be literally translated in English as “The Indecent Rope Kamasutra.”