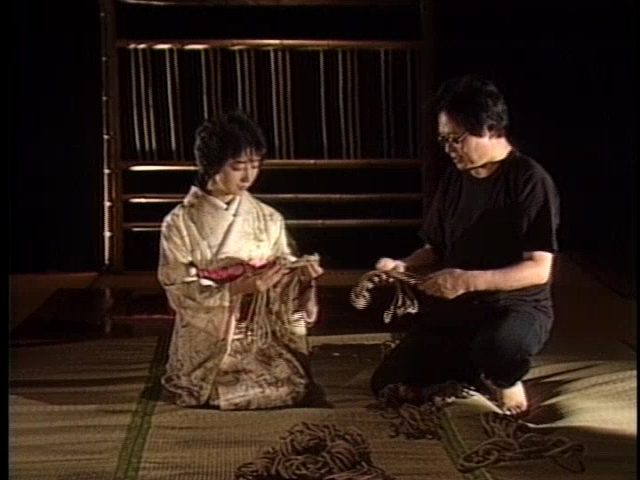 In 1989, CineMagic released Nureki Chimuo’s first of eight videos in his landmark “World of Rope” series.

Representing a distinctive perspective, Nureki was central to the Tokyo style of rope ushered in by Minomura Kou and later developed through videos, magazine and photo shoots, and rope salons. In contrast the the more dramatic show style of performance being developed by bakushi such as Akechi Denki, Nureki (along with Yukimura Haruki and legendary kinbaku photographer Sugiura Norio) began creating a style that emphasized the beauty of the model and focused on kinbakubi or the “beauty of kinbaku.”

This style has been further developed by Nureki’s deshi, Naka Akira, who has also worked closely with Sugiura Norio, in the evolution of his semenawa style.

The video features Nureki tying model Takahashi Megumi. This video combines Nureki’s signature tying style with CineMagic’s exceptional production values to create a video which is easy to follow and which provides great insight into Nureki’s technique and approach to kinbaku.

The video features a series of ties, each of which is illustrated with a collection of poses designed to highlight the aesthetic power of the form.

Nureki’s videos often focus on traditional Japanese clothing or costumes, creating a very traditional feel to his rope. In this tutorial, he illustrates a classic Ebi (shrimp) tie, done in full kimono, first tied seated and then as a full suspension.

The video demonstrates several other ties, including a full body hishi pattern tie, how to bind to a bed, an open leg, hand to ankle tie, and second full body tie with crotch rope.

We are pleased to announce that through a partnership with CineMagic, we are able to offer Nureki’s World of Rope both for digital download and as a streaming video on Rope Flix. Over the next few months, we will be adding additional volumes from the series.