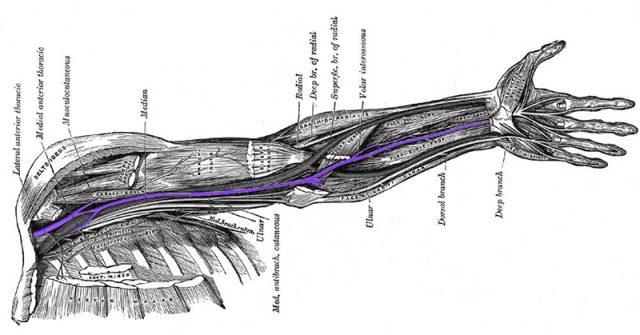 The Brachial Plexus is a network of nerves with five roots in the spinal region. In terms of Kinbaku, and especially the Takatekote chest harness, the Brachial Plexus branches to include the Radial, Median and Ulnar nerves in the arms.

The Radial Nerve branches from the Brachial Plexus above the Clavicle collar bone and emerges at the top rear of the upper arm near the armpit. It then wraps downwards diagonally around the upper arm close to the surface, before sinking deeper near the lower end of the Biceps muscles, and then through the elbow region, supplying muscles that straighten the elbow, and lift and straighten the wrist, thumb, and fingers. The radial nerve transmits feeling from the skin on the outside of the thumb and on the back of the hand and the index finger, middle finger, and half of the ring finger and is positional, to a certain degree, by the tightening and loosening of muscles in the back, shoulder, arm and hand, and by the angle and rotation of joints. It may be in slightly different positions and asymmetric in different subjects.

Compression of the Radial Nerve will be felt as numbness in the back of the hand and/or lower parts of the thumb, index and middle fingers. Most Radial Nerve problems are generated by improper alignment and rotation of joints, a poorly positioned or over-tight Mune Ue upper wrap, or Mune Shita lower wrap, and/or the Kannuki latches retaining them.

The Median Nerve runs down the inside of the arm to the wrist staying close to the surface the entire length, supplying muscles that help bend the wrist and fingers, and is a main nerve for the muscles that bend the thumb. The median nerve also transmits feeling from the skin on the hand around the palm, the thumb, and the index and middle fingers.

Compression of the Median Nerve will result in numbness in the front of the hand, and/or tips of the thumb, index and middle fingers, and if compressed for long periods can cause carpal tunnel syndrome. Most Median Nerve problems are generated by upper Kannuki latching, poor or tight Musubi wrap around the wrists, or poor position and rotation of the forearms.

The Ulnar Nerve also runs down the inside of the arm to the wrist very closely bundled to the Median Nerve, and supplies muscles that help bend the wrist and fingers, helping move the fingers from side to side. It also transmits feeling from the skin of the outer part of the hand, including the little finger and the outer half of the back of the hand, palm, and ring finger.

Compression of the Ulnar Nerve will generate numbness in the outside of the hand and especially in the little and ring fingers, but can also cause problems to the wrist, shoulder, neck and back. Most Ulnar Nerve problems are caused by upper Kannuki latching, too low a Mune Ue upper wrap, or too high a Mune Shita lower wrap.

Compression of the Brachial Plexus itself can also generate all the abovementioned effects because it is the root to the three nerves. Care should be taken when placing tight wraps around or over the top of the shoulders or the sides of the neck.

TAKE IT SLOWLY AND REPEAT EVERY 2 DAYS

1. Rolling rotation – arms extended horizontally forwards, compress an imaginary ball in each hand and slowly rotate the arms fully clockwise and anticlockwise 10 times.
2. Waiters tip – keep the arm straight and close to the side, angle the arm back with the hand rotated palm upwards as if to accept a tip from behind. Slowly tension by moving the head forwards and backwards 10 times.
3. Wall stretch – extend the arm horizontally to the side and place the palm with the fingers down flat onto a wall. Tip the head forwards and backwards slowly 10 times, and then tip the head side to side slowly 10 times.

4. Throwing and catching – one arm at a time, throw an imaginary ball underarm palm up, and then catch the ball overarm palm forwards 15 times.
5. One hand juggling – one arm at a time, throw the imaginary ball up and catch it in the same hand 15 times.
6. Three ball juggling – with both hands, juggle three imaginary balls 20 times concentrating on the flow and position of the balls.
7. Far and near – in Tai Chi style, slowly and methodically push out both arms with the palms forwards, fingers up and pull back with the palms backwards slightly facing up, fingers towards each other 15 times.
8. Rolling wave – in Tai Chi style, slowly roll the arms forwards in a large circular wave. At the bottom of the wave the palm faces up and the wrist slowly rotates on the outwards downwards stroke to face the palm out. One arm at the top of the wave as the other is at the bottom. At the same time slowly tilt the head forwards and backwards 20 times.

9. Carrying the tray – with the arm to the side, bring the hand up, palm facing up, as if carrying a tray. Touch the shoulder with the fingertips. Slowly rock the head side to side 10 times.
10.Pinkie stretches – arm horizontal to the front, bend the forearm vertical. Grab the little and ring fingers with the other hand and slowly stretch forwards and down, bending the fingers backwards. Tilt the head forwards and slowly return head and forearm 10 times. Repeat, but tilt the head back 10 times.
11.The mask – index fingertips to the tips of the thumbs to make a circle, roll the hands backwards and bring the circles to the eyes like a mask. Tilt the upper body slowly side to side so the elbows face the ceiling 10 times.
12.Full roll – in Tai Chi style, slowly push the hand away from the chest palm forwards and fingers pointing across the chest, and sweep the arm around and down to the side. Imagine holding a tray from underneath on the palm and rotate the tray backwards, up and forwards until presented in front of the face 5 times.

Every Kinbakushi or rigger has a preferential style. The following are merely tips to help avoid problems with the Plexus Brachialis Nerve Branch.

The first Musubi cuff wrap – Honmusubi (Book Knot/Single Column Tie), Marumasubi (Circle Knot), Somerville and French Bowline and variations may all be used to cuff the arms together behind the model. Any non-slip knot to form a loose shelf for the retained forearms to sit may be used. Care should be taken as to the complexity, especially in regard to release time, and to avoid crossing or uneven ropes. The Honmusubi is directional, and will generate a small amount of angular strain as the Michinawa spinal rope stem pulls vertically upwards. The Marumusubi is bidirectional, can be tied with a fast-release loop, and functions effectively with two or three wraps. Any reported numbness generated in the Brachial Plexus network can be instantly relieved by pulling the Marumusubi fast-release loop, allowing the model to lower the arms to reduce tension on the Mune wraps.

Arm positioning – when the forearms are parallel, one in front of the other with the wrists facing backwards and avoiding the cuff wrap directly over the exposed wrist the rotational alignment will push the Radial Nerve slightly deeper away from the surface of the bicep muscles, as will crossing the arms lower than horizontal. Elevated crossed arms on the back will add stress, as will rotating the arms to face the wrists together pushing the Radial Nerve on the arm facing inwards back towards the surface. Each model will have a preferential position that is commonly different left-to-right.

Upper Kannuki latch – the tendency has been to move away from this upper latching technique because it can often be the source of nerve problems. There are many alternative methods to retain the upper Mune Ue upper wrap securely: the looped Wakkadome loop, either from the second line of the lower Mune Shita lower wrap up between the breasts, over the upper Mune Ue wrap and back, or from the returning lower Kannuki latch lines in the same fashion over the rear armpit areas, or by using Tasuki bra-strap lines over the shoulder and returning under the lower Kannuki, or Tasuki wraps passing over the Mune Ue at the upper arm, crossing between the breasts, and returning again under the lower Kannuki.

Nawajiri/gashira connections – even tying the same model the same way with the same ropes may result in the connection point between ropes moving to different positions. Avoid the bulk of the knot over the outside of the arms. In the case that the knot is the front of the Mune wraps, stress can be alleviated by rotating the Nawagashira loop so that the loop sits against the skin and the Nawajiri knots face outwards. To finely adjust the position that the knot will sit, or realign the knots, wrap the rope/s around the Michinawa vertical stem over the spine to shorten the line/s. If the Mune Ue upper wrap is comfortably tight and horizontal at the rear, this will provide enough exposed Michinawa to do this.

Lower Kannuki – these latches provide the final tension to the Mune Shita lower wrap and mean that the wrap itself does not have to be tight, as the Kannuki can be used to increase and balance the tension left to right. A correctly tied Takatekote will be perfectly secure without being painfully tight, and you should be able to get two fingers comfortably under the wraps when complete.
Footnote:

Sin would like to point out that he is not a medical professional but had a 20-year career within motor sport safety, working alongside doctors and paramedics, and received advanced first aid, post-traumatic stress disorder and major incident training.

His notes on the Brachial Plexus nerve branch regarding the Takatekote chest harness he uses to help his performance models during training. However, he is open to any better information from qualified medical professionals involved in the specific related area.