Home Articles The Joy of Sarugutsuwa: An Appreciation of Traditional Japanese Gags 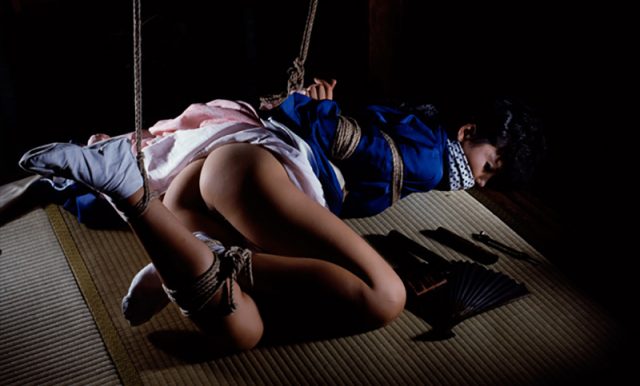 Some ten or fifteen years ago, Tokyo-based writer and translator Alice Liddell spent an evening with an elderly but still spry aficionado of Japanese bondage-style gags. He was more than happy to talk, and did for several hours, but did not wish his name or image used.  Her write-up of their discussion on traditional thought and practice in Japan about gags was originally published on Tokyo Bound, and is reposted here with the permission of that site’s owner.

Is there a difference between Western and Japanese gags?

Absolutely. Western-style ball and bar gags are available in Japan, and there are certainly many Japanese people who use and like them. I’ve experimented a bit with Western-style gags, but I don’t like the way they open the mouth, and I don’t like the way they look. Unless a model is very beautiful, I think a ball gag looks ugly. But a traditional Japanese gag is aesthetically pleasing and makes women in bondage look even more beautiful.

What is the traditional style of gag in Japan?

A strip of cloth, either fitted into the mouth and tied behind the neck, or wrapped over the mouth and lower part of the face and tied. There are variations, of course, including rope gags. The English word “gag” has come into the Japanese language, written in katakana and pronounced “gyaggu.” But the native Japanese word is sarugutsuwa, or “monkey bit.” That’s the word I use when speaking of traditional bondage-style gags.

Can any kind of cloth be used?

Of course. Keep in mind that in the old days, strips of cloth were always close at hand in Japan. A kimono has no buttons or fasteners, and is held together by sashes. A woman, in particular, would use several cords and sashes to hold her kimono closed. So if you had a woman in your clutches, you’d have many strips of cloth from her own clothing to use when tying and gagging her.

Do you have a preference in gag material?

Yes. Like many aficionados of Japanese bondage-style gags, I prefer an old-fashioned woven cotton cloth called tenugui. In the old days, it was used for many things including cleaning and bathing. It is still very common in Japan. My wife, for example, uses it to strain broths and shape soft foods, in very much the same way Western cooks use cheesecloth. Tenugui is also used in traditional arts, including the tea ceremony, dance and martial arts, and is printed and dyed in many patterns, both traditional and modern. To me, tenugui cloth in a traditional pattern is the most aesthetically pleasing form of gag. It looks just right with rope.

Does the size of the cloth matter?

The standard size for tenugui is 90 cm long by 33 cm wide. Odori, or dance-length tenugui varies in length, but can be about 100 to 120 cm long. But really, size doesn’t matter. You want the length long enough to tie behind the neck, obviously. And width can be anything that works for you and has the desired effect.

Are there certain tenugui patterns that are associated with bondage?

Not exclusively, but many gag lovers would choose a blue-and-white tie-dye pattern called mame shibori as their first choice. It has a very traditional look. I also like a lovely old-fashioned geometric pattern called asanohana, which means “hemp flower.” That seems particularly appropriate for use with rope bondage, don’t you think? I also like other old patterns such as kikugorogoshi, which was designed long ago for a famous family of Kabuki actors, and matsuba chirashi, which means “scattered pine needles.”

What is it about a gag that appeals to you?

Just as rope around a woman’s ankles or wrists deprives her of the ability to move freely, a gag deprives her of speech. My goal is rarely to silence her completely. I like to hear her protests against the gag, the little moans and cries and muffled attempts at speech. Listening to those sounds is just as pleasurable as watching a woman struggle and strain within her ropes. I like the way the gag lets her know that I don’t want to hear anything she has to say, and that I’m going to do what I want to her regardless. The other major appeal, for me, is making the submissive accept something in her mouth. The mouth is a very sexy part of the body.

Do you have a favorite way of gagging a woman?

I like to let her see me preparing the gag so she knows what’s coming. She can ask for forgiveness or mercy. She can beg me not to gag her. But I just keep on preparing the gag. And when I’m tired of hearing her noise, I gag her up nice and tightly.

It depends on the situation. I like to tie a knot in the middle of the cloth, and order her to open her mouth so I can place the knot in her mouth. Then I tie that cloth behind her neck. She feels the knot on her tongue as well as the cloth pulling at the sides of the mouth. I can still kiss her or play with her mouth if I want. If I want to silence her more, or punish her more, I’ll pack her mouth with a handkerchief and then tie the packing in place with a strip of tenugui. For more sound-proofing, I would take an extra long dance-length strip of tenugui and wrap it all around her mouth and chin, over the gag I’ve already tied on her.

I’ve seen bondage-style gags that cover the nose as well as the mouth.

Yes, there are gag aficionados who don’t think it’s a proper gag unless the nose is covered as well. I agree that’s a nice look. I love the way such a gag accentuates the eyes by hiding the rest of the face. Rather like an Arabian veil, don’t you think? Part of the pleasure of putting a woman in a gag that covers her nose as well as her mouth is looking at her eyes afterwards. I can read in her eyes everything she is feeling. I can see whether she’s resisting, pleading or yielding. But a gag that covers the nose as well as the mouth is quite harsh, and you have to be careful that she is getting enough air. I usually save such a gag for when it’s truly deserved.

How would you increase feelings of shame and humiliation?

Using something dirty for the gag. My smelly socks or a filthy rag may be revolting to her, but too bad. If I want to really shame a woman, I’ll pack her mouth with her own panties, particularly if she’s soiled them by becoming excited by the things I did to her before I took them off her body. I would certainly point out how wet she made them as I pack them in. Then I would tie the panties in place by making her accept a strip of cloth in her mouth. By the way, underpants for women weren’t common in Japan until about the 1920s. Traditionally, women wore a cloth called a koshimaki under their kimono. It was wrapped around their hips but not between their legs. Panties may not be traditional, but I still like using them as a gag.

How about writing something on the gag? I’ve seen that in old bondage photos.

Sure. You might, for example, write doreizuma (slave wife) across the front of the gag. Having writing on the gag is a nice way to increase the humiliation, particularly if there are witnesses. In Japanese schoolgirl spanking scenes, a sign that says oshioki chu (undergoing punishment) is sometimes attached to the girl being chastised. I’ve seen the same tactic used in Western schoolroom scenes, like hanging a “dunce” sign on a pupil who has been ordered to stand in the corner.

Sometimes I put a gag on for ten minutes and then remove it. I let her rest for ten minutes and then on it goes again. I usually don’t bother to tell the woman what I’m doing; the smart ones figure it out pretty quickly. Of course, I make sure she has a clock she can see. What I like about this is that it adds the mental agony of watching the minutes go by, knowing she is going to get the gag again. Once, as a punishment, I ordered my slave to sing me a song while gagged. Having to do that with an obstruction in her mouth emphasized her helplessness and she had tears running down her face by the end. The possibilities with bondage-style gags are nearly endless.

Tenugui can be ordered online from any number of vendors. In Tokyo, a wonderful if pricey place to buy high-quality tenugui in many lengths and patterns is Oono-ya in Ginza, located near the Kabukiza theater at 5-12-3 Ginza, Chuo-ku, Tokyo, steps from Exit A1 of Higashi-Ginza station on the Asakusa and Hibiya subway lines. Open 10-5, closed Wednesdays and Sundays. 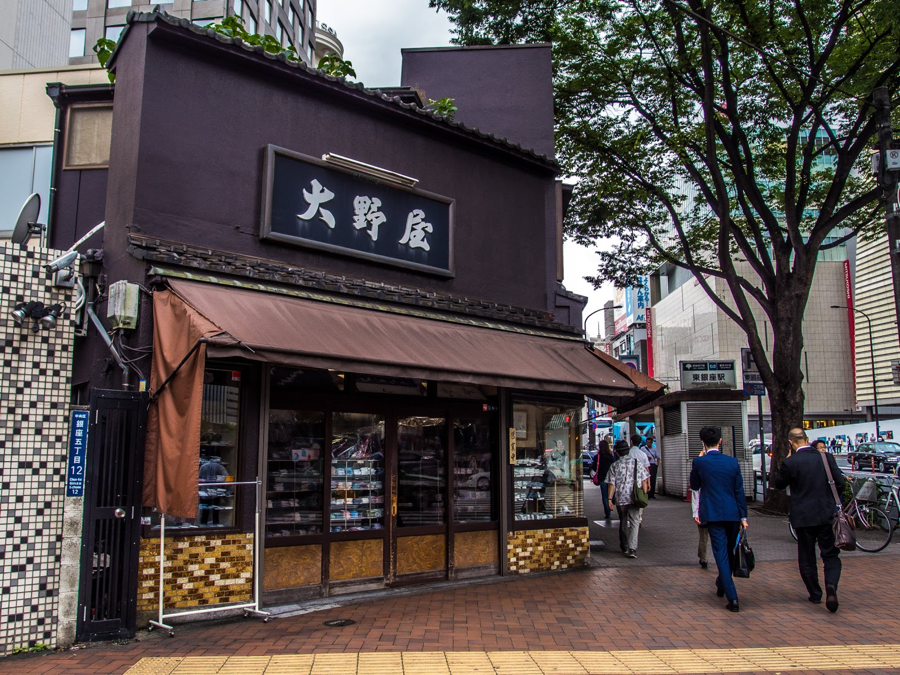