Home Interviews Interview: The Ascent of Milla Reika (Part One) 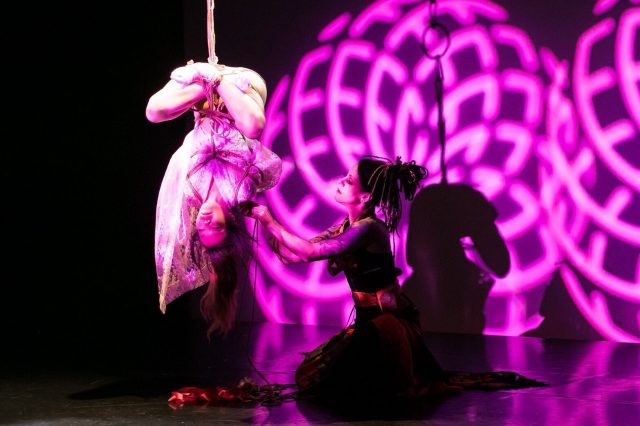 An exotic sounding name.  As exotic as the prospect of traveling alone around the world seeking adventure and discovering what the world has to offer.  Something that the then twenty-year old Australian native did when she left her home in 2006. Three years later, Milla found herself in Japan for what she thought would be a short-term stay.

I met with Milla to discuss her first foray into publishing, a photo-book titled “The Descent of Inanna,” as well as to learn more about her intriguing life story.  Milla’s open and warm personality, infectious smile, and passion for all things Kinbaku instantly put me at ease as we spoke across thousands of miles via video chat.

You have quite an eclectic and original fashion sense, where did that style originate?

Oh my God, I have no idea. Where did I get it from?  I suppose it is quite unique and yet I hate to say it’s original because I don’t think anything is ever original.  We take things from places and we adapt them. So, I’m not entirely sure. I’ve always loved anything that’s a little more extreme.  Taking the gothic look and fusing it with that really elaborate ornate Japanese style has always been quite aesthetically pleasing for me especially on stage.  I don’t know where I pulled that from. Are you talking fashion sense just in my performance or in my personal life?

In both.  You don’t present yourself like the traditional rope artists in Japan.  Your style is always evolving and visually interesting.

I guess I’ve always hated conforming.  Always being the same is quite boring for me. Why do you have to stick to one style?  I like gothic. I like the ornate Japanese aesthetic. I like hip-hop style. I can never decide which one I like more.  But I don’t think they need to be put into these defined categories. Why can’t you play with them? Visually, color coordination is quite important but you can mix styles, and if it works then it works.

Your performances also feature music that is as varied as your attire.

I’ve always been into industrial EBM style of music. It’s always been something that I come back to and I use it a lot in my shows.  Usually I try for anything that has no lyrics when it comes to performance. On a personal level, I love going to jazz concerts, hip hop concerts.  My favorite band now is Die Antwoord. I definitely have a broad range depending on my mood at the time.

Is it easy or challenging for you to combine these elements with Kinbaku?

I think with performance, it is entertainment.  I stopped trying to take the traditional Kinbaku on stage a while ago because it was challenging to harmonize the two.  Trying to stay true to how I see Kinbaku and how I practice and feel it, and trying to be an entertainer and a performer.  I realized that you can’t pull the two together and have them exist in the same space. So, I started sort of separating them.  This is me as a performer and this is me in a private group setting as a Kinbakushi or as a rope practitioner. I don’t quite know what the right term is politically.

What inspired you to create and perform The Descent of Inanna?  The story is clearly not Japanese.

It’s the ancient Sumerian myth.  I was reading Salome, which I really love.  The Descent of Inanna is where parts of Salome originated or were influenced.   I found it really resonated with me on many levels. Inanna is the Goddess of light and love but also war, which is very interesting and quite contradictory.  The story is about her descent into the underworld to see her sister the Goddess of the underworld; darkness, and the moon.

Duality is a theme?

There are opposites going on.  Within themselves they have contradictory things like love and war.  Inanna’s sister Ereshkigal, harbors a lot of pain, resentment and loneliness within her. She’s also very strong.  She’s the judge of death. It’s a very symbolic and layered story. When you read the original translated poem, it is really hard to figure out what is actually going on. There are many different ways to read and interpret it. And I’ve probably read it ten different times and interpreted it ten different ways depending on the day. I like some of the base concepts which seem to parallel with that of the yin and yang and also interdependence whereby one cannot exist without the other.  When you think of them, it’s not all black and not all white. Both exist in each aspect.

It sounds like the dynamic between a rope top and bottom.

Right.  And this relationship that goes on between us.  When I am tying…Yeah, I’m dominating and controlling, but then the bottom’s reactions and the way she reacts to me cause me to respond in a way towards her.  So, who’s controlling who then? Who’s causing the other person to react? It comes to a point where it’s really fluid and you are not two separate beings anymore and it’s one sort of thing that’s really connected.  It delves into the deeper emotional aspects as well. We experience love and through love we experience suffering and jealousy and we go through all these different emotions in our relationships and we have a lot of different desires. These do not exist separately from one another.

In the myth, Inanna is not a complete person until she allows herself to be vulnerable to her sister Ereshkigal.  In so doing, Inanna dies and is reborn; a revitalized and new being. Is the story a metaphor for your own life journey?  In a sense, being reborn when you moved to Japan and became a rope artist?

That is going quite deep.  I wouldn’t say so much that it’s a metaphor for myself.  Also remember, I portray Ereshkigal not Inanna.  But I mean I wrote this.  I think it was me trying to show how I view life in general.  Psychology, human relationships and social behavior has always been very interesting to me.  Also concepts of yin and yang have been very closely linked to my thinking. Why do I like dominating somebody?  Why do I feel excited by these things? Where did these desires spring from? I think it’s not so much a metaphor for my life, but an expression of how I understand a lot of things about myself and the world around me.

It’s a vessel in which to express a lot of things that I think and feel but maybe cannot express in words.

Are there other things you discovered creating Inanna?

Having delved deeper into Kinbaku as a practice, I realized it is something that cannot be reproduced onstage.  Stage performance is at the end of the day, showmanship. The goal is to express something to a third party; an audience.  I try to keep the principles and core of Kinbaku present in my shows as much as possible, but the need to compromise some of these became even more apparent to me when creating The Descent of Inanna.  I’ve taken different concepts and produced it as art-entertainment at the same time. Having the freedom to do that without compromising my traditional view of what is Kinbaku is liberating. The fact that I can divide it allows me to sort of play in both worlds without feeling that I’m being dishonest to one side.  The division between my Kinbaku performances and my Kinbaku as a practice, has been a very big thing. I’d like people to know that the rope that I do on stage and the rope I do in private settings are different. Even though I try to keep the core elements in both settings. Does that make sense? Hopefully people see that anyway.

This concludes part one of my conversation with Milla Reika.  In part two, she discusses Kinbaku in more depth and how she was performing on stage within four months of learning to tie for the first time.

To order your copy of The Descent of Inanna, Milla Reika’s first photo-book illustrated with stunning photographs of her stage performance:  https://milla-feline.stores.jp/

The shipping for the book is free. 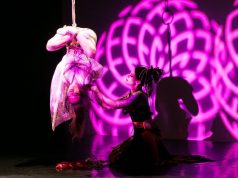