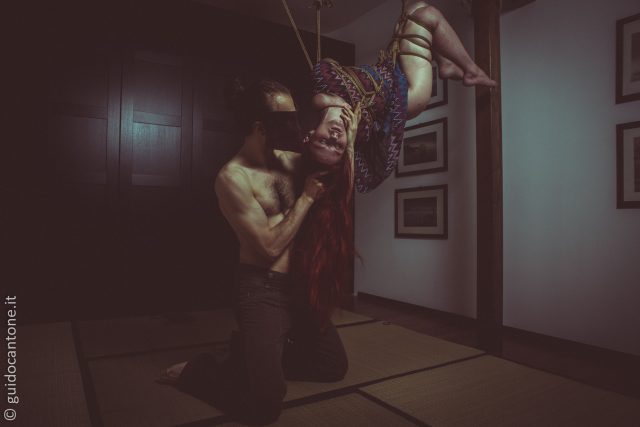 I first wrote the following text in Italian. It was printed on a leaflet handed over to the audience before a kinbaku performance in Milan in March 2016. “Eros and Thanatos” was both the theme of the night, and the title of the leaflet. Upon suggestion, I decided to translate it into English for publishing. From now on, the plural “we” shall mean Tenshiko – my partner in life and bottom for that show – and I.

While the symbolism linked to Eros – a personification of passion and lust – can be easily interpreted, the connection between the character of Thanatos and kinbaku is definitely less obvious. This choice comes from many facets of the myth related to god Thanatos.

The first analogy easily lies in the fear of the unknown. The person who lend him/herself to the hands and to the ropes of the tying person cannot know for sure
what is going to happen; the tied person gives up to a force that cannot be completely controlled.

The first and primal reaction to a lack of control is fear, eventually overcome by resignation and surrender. In this sense, we perceived such a strong link between the concept of wabi-sabi – a composed acceptance of the impermanence of things – and the character of Thantos – a peaceful death – as opposed to Ker – a personification of
the violent death -.

The deep empathy from the tying person for the condition of the tied one shall not prevent the impassive contemplation of suffering. The tied person is led by the compassionate inflexibility of the partner in order to overcome the aporia created by pain and the impossibility to escape it.

In this dynamic we recognize Atropos too – the inexorable one -, the goddess who steadfastly cuts the thread of life with shiny shears. We find thisfusion of feminine and masculine – entirely bound into Eros -, inside this affinity between Atropos and Thanatos.

The notion of eroticism itself is completely unrelated with the concept of sin, both in Japan and in ancient Greece. The drama of the exposition moment is therefore coming from the dissonance between the private sphere and the public one: in this perspective, the unveiled and exhibited intimacy becomes a reason for shame. The impossibility to keep
bodily reactions as private and hidden – breathing, sweating, salivation and arousal too – is the source of the pathos distinguishing kinbaku.

The path towards surrender to suffering shows – almost morbidly – a body and a soul forced to make use of their deepest and darkest resources.

The challenge thrown down via the tension of the rope exactly lies inside this effort to glean the last energies and in this convulsive exhaustion of muscles and nerves. The rope becomes a bridge between two people, linked by visceral trust and a silent dialogue, where the tying person vexes the partner, more and more stringently, rope after rope, strain after strain.

Repeatedly, with a syncopated rhythm, the tied person is left alone with his/her fears, anyway sure to be consoled and supported again by the tying person. The latter accompanies the former through a progressive but inexorable exhaustion. This way until the release – both gifted and earned – which leaves both people in a perfect fulfillment, more aware of oneself and of the other one.