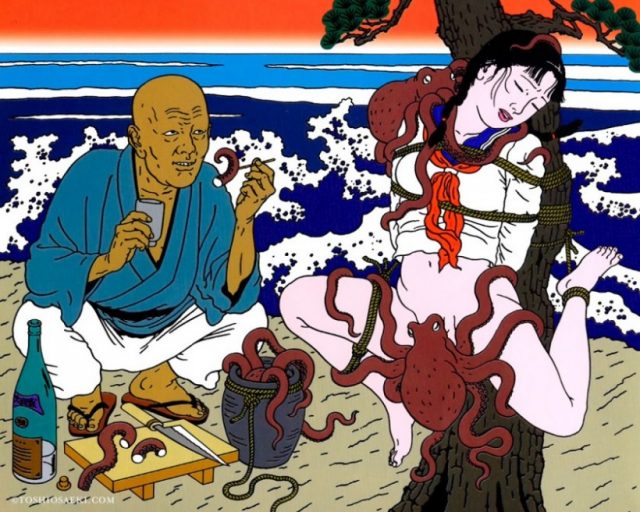 In the history of kinbaku there is one print by Yoshitoshi that is legendary for its beauty, its influence, and its effect.  That work is “The Lonely House on Adachi Moor,” which depicts a hag, with a knife before a pregnant woman, bound in rope, inverted suspended from the rafters.

The story of the hag is told in many ways, but usually involves the transformation of a wealthy family’s nanny into a Yōkai or ghost.  In one telling, the servant of an Imperial family is commanded to acquire the liver of a pregnant woman to save the life of a member of the family.  The nanny sets off, leaving an amulet with her own daughter for protection in her absence.  Many years pass and the nanny finally lures a pregnant woman into her house and performs the grisly act, cutting her open and removing her liver.  After doing so, he discovers the woman is wearing the amulet she had given her daughter as a child.  The hag is then driven mad by the realization that she has murdered her own daughter and becomes a ghost or yokai, continuing the ritual of abducting and killing travellers.

It isn’t surprising to find that the tradition of ghost stories and kinbaku have maintained a strong connection throughout the years, perhaps most powerfully and directly in the work of Toshio Saeki, one of the fathers of modern EroGuro art.

Saeki, born in 1945, follows in the tradition of writers such as Edogawa Ranpo, whose work explored mystery, ghost stories, and homosexuality in Japanese culture.  Saeki combines the topic of extreme or grotesque sexuality with the aesthetics of manga, bright colors, and flatness, an artistic perspective that harkens back to ukiyo-e woodblock printings.  Earlier artists such as Tadanori Yokoo, with his bright use of colors, also provide a point of reference for understanding Saeki’s early influences.

As Saeki, himself explains the origins of his artwork, it is deeply connected to the absurdity or “grotesque” nature of desire and sexuality:

“During preparatory school, my Uemura classmate had discreetly shown me erotic paintings from the Edo period. I believe to remember that they were prints printed on Japanese paper. The colors were bright. At the sight of the scenes represented, perfectly shameless, I was astounded then conquered by confusion. In regard to when girls and boys test each other’s embarrassment, I “had already played doctor”, an experiment which returned a little of my senses to me at the moment. However, I was not at all able to understand this grotesque tangle of bodies. I had been doubtless convinced that they were drawings skilfully carried out by the insane, applying an indecent imagination to unreal scenes.” (Toshio Saeki, Memories of 1970, trans. Akatako.net)

That artistic sensibility would find a home in one of the more popular SM magazines at the time, SM Select, which ran from 1970 to 1990 and featured work by Nureki Chimuo and would launch the career of famed SM photographer Sugiura Norio.

According to Oniroku Dan, SM Select reached such popular acclaim that at its height it was selling more than 100,000 copies a month, making it far and away the most successful of the magazines of Japan’s underground publications.

Saeki’s version of Hokusai’s famous painting The Dream of the Fishermans’s Wife, for example, is update and made much more explicit, now featuring a young girl engaging much more dramatically and directly with her cephalopod partner. 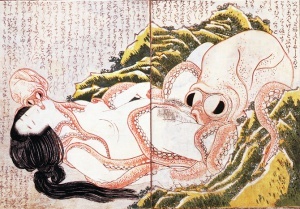 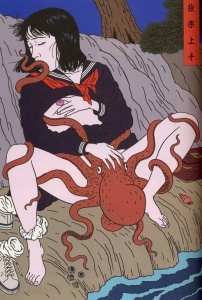 There can be no mistake about the reference Saeki is making by showing us the young schoolgirl in a nearly identical depiction.  The re-contextualization however calls up something much closer to manga than it does to traditional ukiyo-e.  Saeki’s work brings to the fore the essence of hyperbolic sexuality, often combined with youth, violence, or themes of violation.

Many of Saeki’s work would feature kinbaku in a variety of contexts, usually in the form of intense violation, dismemberment or gore. 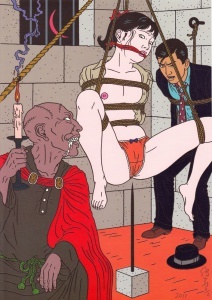 To the left is an image which demonstrates the combination of SM related themes, with the imagination of a writer of ghost stories.  The young woman abducted by a sinister villain faces impalement as her captor uses a candle burning the support rope while her bound partner helplessly watches.

Such themes would be perfectly suited to magazines such as SM Select which had often evolved from suspense and horror publication in their earlier incarnations.

The essence of Saeki’s work is to embed perversion in the mind of those who view his work.  He writes:

At the beginning of my career I was neither constrained, nor hesitant when I chose the eroticism as a topic, even if I were told to take precautions. The sexual topics that inspire loathing in the majority of people will always stubbornly persist in their aversion. The world of art can choose the high or the low road with its hot head. That was not the road I decided to follow and for me, it was good after all because what counts in the end is going to the front.

In that sense, for Saeki, what is more disturbing to us about our sexuality is also what is more important about it. That sentiment is what defines, animates, and provokes us in his work.